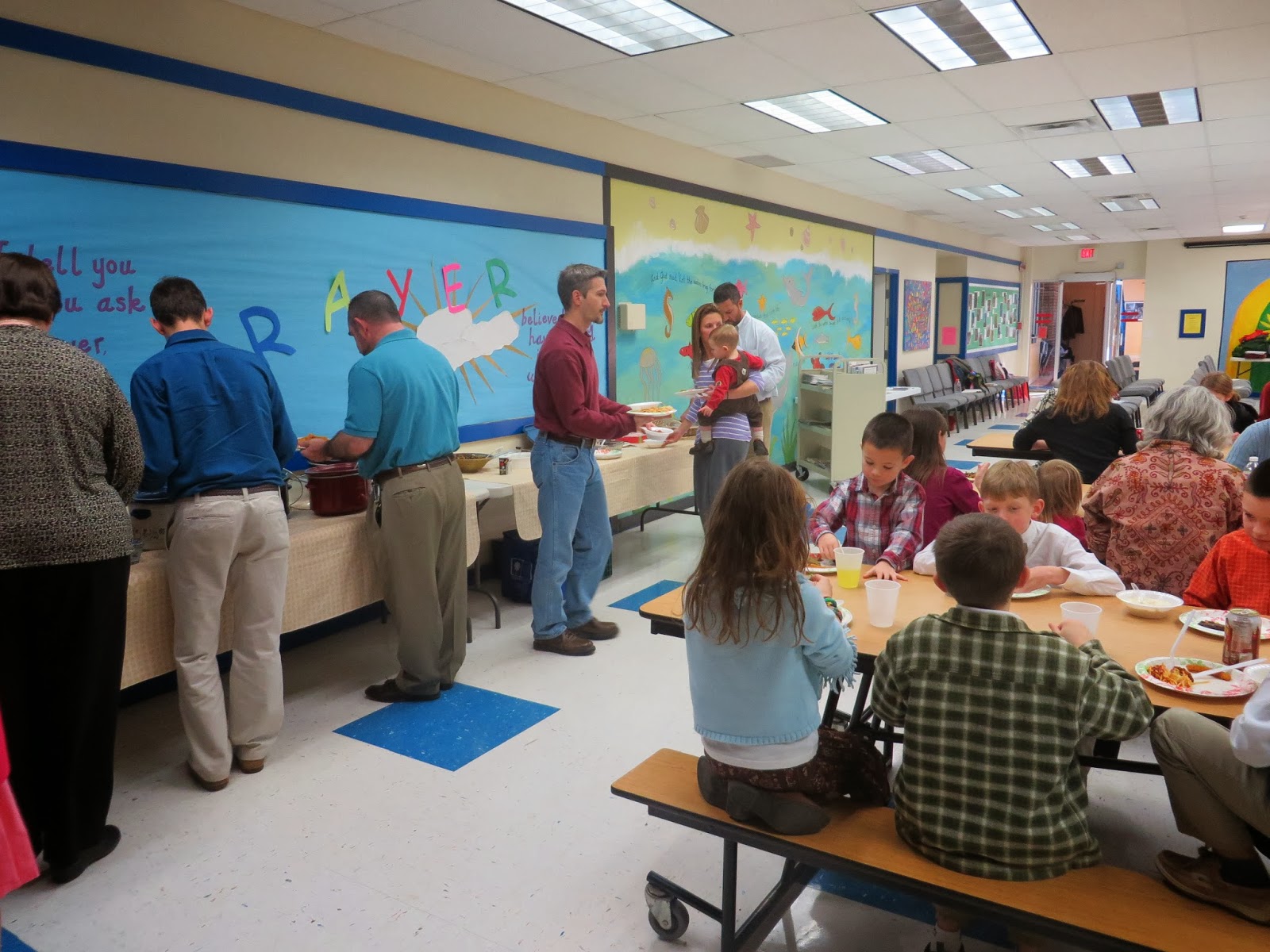 Scene:  Lord's Day lunch at CRBC (1.12.14)
Note:  I preached last Sunday on Jesus’ parable of the Pharisee and the Publican, noting that Jesus teaches justification by faith here in a way that sounds very much like what Paul would later proclaim.  Here are some notes:


Luke 18:13 And the publican, standing afar off, would not lift up so much as his eyes unto heaven, but smote upon his breast, saying, God be merciful to me a sinner. 14 I tell you, this man went down to his house justified rather than the other: for every one that exalteth himself shall be abased; and he that humbleth himself shall be exalted.

In nearly complete contrast to the prayer of the Pharisee is that of the publican (v. 13).  The publican is also standing, but he stands “afar off.”  His distance from the center of the temple, reflects the spiritual distance he feels from God due to his sinfulness.  And the temple was very much designed to give a physical representation of sanctification.  It all centered around “the holy of holies.”  If you were not holy, you had best not come close, lest you suffer the same fate of others who have acted presumptuously and suffered the consequences (Nadab and Abihu in Lev. 10; Uzzah who committed the “error” of reaching out to steady the ark in 2 Sam 6:6-7).  Whereas the Pharisee boldly mouthed God’s name, though he was really speaking to himself, this second man, Jesus says, “would not lift up so much as his eyes to heaven.” And instead, he smote or struck (typto:  to strike to beat; it can even mean to wound, as the root verb indicates, to leave a “type” or mark) upon his breast (v. 13).  Notice, as well, that the verb here is in the imperfect tense.  It refers to repeated action in the past.  He did not just strike himself once but multiple times.


And then, if this stance was not enough, there are his words which match perfectly his posture. His prayer is:  “God be merciful to me a sinner.”  The verb here for “to be merciful” is hilaskomai.  It is not the root word that is typically used in the New Testament to describe the giving of mercy in the sense of allowing someone to escape some penalty he is rightly due.  This root word does not appear, for example, in Luke 6:36 where Jesus taught:  “Be ye therefore merciful, as your Father also is merciful” (there the adjective oiktirmon is used).  The word used here (hilaskomai) literally means to make propitiation for sins.  Compare:


Romans 3:24 Being justified freely by his grace through the redemption that is in Christ Jesus: 25 Whom God hath set forth to be a propitiation [the related noun hilasterion] through faith in his blood, to declare his righteousness for the remission of sins that are past, through the forbearance of God;

1 John 2:2 And he is the propitiation [the related noun, hilasmos] for our sins: and not for ours only, but also for the sins of the whole world.

1 John 4:10 Herein is love, not that we loved God, but that he loved us, and sent his Son to be the propitiation [hilasmos] for our sins.


There are a couple of things that secular Bible scholars don’t like or understand about this passage.  First, they don’t like the fact that Jesus teaches not only that man needs his sins taken away (expiation), but that he also needs those sins paid for by someone else in order to satisfy the wrath of God (propitiation).  Second, they don’t like the fact that what Jesus teaches here sounds so much like what the apostles Paul and John teach.  They want to drive a wedge between Jesus and the apostles (particularly Paul).  Jesus, however, presents the publican as a man who knows he is a sinner and who knows he needs a propitiatory sacrifice for his sins.


To round it off, Jesus closes:  “I tell you this man [the publican] went down to his house justified rather than the other” (v. 14).  Here is that great Pauline expression—a Pauline thunderbolt— on the lips of Jesus.  Jesus speaks of a man being justified by faith and not by works, the great article of the faith upon which Luther said our religion either stands or falls.  Jesus teaches just as Paul did:


Romans 5:1 Therefore being justified by faith, we have peace with God through our Lord Jesus Christ:

Galatians 2:16:  Knowing that a man is not justified by the works of the law, but by the faith of Jesus Christ….


We are given a model here of what we are to avoid:  The self-trusting, self-justifying disposition of the Pharisee, which is accompanied by a looking down upon others.

And we are given a model of what we are to follow:  The publican, who comes to the Lord empty handed.  “Nothing in my hand I bring, simply to thy cross I cling.”


The only man who can truly pray is a saved man.  And the only way a man can be saved is if he understands his sin and his desperate and profound need of a Savior.  He must come with a publican-like spirit and not with a Pharisee-like spirit.  This is the mark of a man who has been justified by faith.