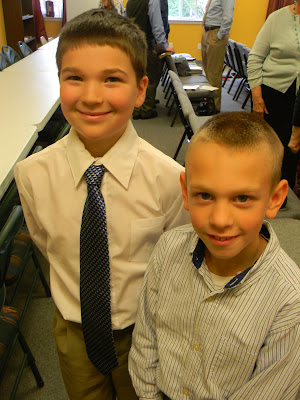 Image:  Two young CRBC men after worship on a recent Sunday.
Note: In last Sunday’s message from 1 Samuel 25, we contrasted the foolish response of Nabal and the wise response of Abigail to David, seeing this as an anticipation of two ways that men might respond to Christ. Here are some of the message notes:
As David sent messengers to Nabal demanding that he give over to him what was rightfully his (1 Samuel 25:5-9), so the Lord Jesus Christ today sends forth his messengers. We are his ambassadors (2 Cor 5:20), and we bring orders from our Prince demanding that men humble themselves before our King and give over not just pieces or portions but all their lives to him.
Notice the folly of Nabal’s response to David. He ask, “Who is David? And who is the son of Jesse?” (v. 10). So today foolish men ask, Who is Jesus Christ? Who is this one from the stem of Jesse who claims to be the Son of God? Who is this one who died on a cursed tree and claims to have risen again from the dead? Who is this one who dared to make himself equal to God? The truth is, they ask the questions but they really don’t want to receive the answers. In 2 Timothy 3:7 Paul spoke of those “ever learning, but never able to come to the knowledge of the truth.”
Notice also that Nabal did not want to acknowledge David, because he feared what he would have to give up (v. 11: “Shall I then take my bread, and my water, and my flesh…”). I have heard men make the excuse that they did not want to profess faith in Christ because this would mean that they would have to join a church and then folk would be asking them to give to support the church. Listen, they don’t know the half of it! Does the Lord want your money? Yes. You cannot serve God and mammon. But he also wants your time, your energy, your family, and even your body: “I beseech ye therefore, brethren, by the mercies of God, that ye present your bodies a living sacrifice, holy acceptable unto God, which is your reasonable service” (Rom 12:1).
And what did Nabal do when David’s messengers withdrew? He held a feast in his house and he tried to substitute the joy and satisfaction that only Christ can give with the drunkenness (v. 36). He thought he was living a like a king, but he was a spiritual pauper. There is, no doubt, an argument in this description against the dangers of drunkenness. Proverbs 20:1: “Wine is a mocker, strong drink is raging: and whosoever is deceived thereby is not wise.” He is a Nabal. Banner of Truth has recently published a series of little books that can fit in your pocket. One is titled “Binge Drinking” and it has excerpts from a book by the Puritan John Flavel warning seamen against the sin of drunkenness. Therein, Flavel writes, “Take heed, and beware of the detestable sin of drunkenness, which is a beastly sin, a voluntary madness, a sin that unmans you, and makes you like the beasts that perish; yea which sets you below the beasts, which will not drink to excess….” Of course we might say that there are Nabals who are not drunk merely with strong drink but with the world. The world is too much with them and they seek pleasure in it rather than in Christ alone.
And finally, what is the end for Nabal (see v. 38: “And it came to pass about ten days after, that the LORD smote Nabal, that he died.”). He was born a fool; he lived a fool; and, finally, he died a fool. The Lord struck him down. The end of the man who rejects Christ is death. Not just physical death but spiritual death.
May we not have a “Nabal response” to Christ, but let us look to him and live.
Grace and peace, Pastor Jeff Riddle
Posted by Jeffrey T. Riddle at 8:47 PM

Thanks so much for this post. I wasn't familiar with the story of Nabal, so I looked it up. Your post provided an extremely helpful context with which to frame the tale, without which I mightn't have got very much out of it.