NPR (!) Celebrates the 400th Anniversary of the KJV 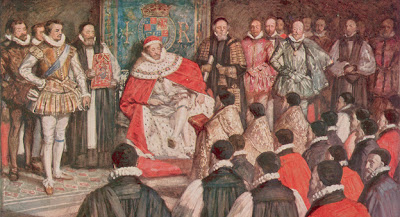 Last Monday (4/18/11) NPR ran a story by Barbara Bradley Haggerty celebrating the 400th anniversary of the AV:  "Hallelujah!  At age 400, King James Bible Still Reigns" (you can read and listen to it here).
The article has a few glitches but is generally commendable.  One of the oddest things to notice in this year marking the 400th anniversary of this most venerable English translation is the fact that this milestone is being celebrated more by secularists than by evangelical Christians.  Can you name one major evangelical Christian conference that is marking this milestone (cf. for example the emphasis given to the 500th anniversary of Calvin's birth in 2009)?  I believe part of this is due to the fact that there has been such an effort, particularly over the last c. 50 years in evangelical circles, to promote modern translations (based on modern texts) in part by demeaning the value, beauty, and usefulness of the KJV.  Granted, part of this has also been reactionary against extremist KJV-defenders.
The NPR story notes:
Today, newer, colloquial translations have pushed the King James aside. It's mainly used in African-American, Mormon and a few Protestant churches. But in moments of tragedy or turmoil or change, leaders have often turned to the King James.
The story concludes:
[Gordan] Campbell adds that this Bible is foundational to the English-speaking world. "It's in the texture of our society rather than on the surface of it, I think. But if you trace back who we are, how we speak, how we think, many of those things have their origins in the King James Bible."
He and others say that new translations will come and go, as our language changes with each generation. But as long we can understand the King James Bible, this four-century-old book will be seen as the voice of God — and the highest poetry of man.
I can just see someone adding NPR to the list of "KJV-Only"ists!
JTR
Posted by Jeffrey T. Riddle at 1:41 PM

There is a site put up by Thomas Nelson publishers celebrating the 400th anniversary. You can find it here:

I believe Nelson is also involved with the making of a DVD for the celebration.

But in general I agree with your observation. I have even seen videos online of atheists lauding the virtues of the King James Version. But there has been, in general, a lack of celebration in Evangelical circles. But not only Evangelical. Where I live I looked for a celebration and was unable to find one in any church community, conservative or liberal or inbetween. The local spiritual bookstore, in contrast, is holding a celebration.