I had the privilege of preaching last Lord’s Day morning on More Than Conquerors from Romans 8:31-37.

In meditating on v. 32 (“He that spared not his own Son, but delivered him up for us all…”), I reflected on the natural tendency of the flesh to revolt against the Biblical teaching of Christ’s atoning death on the cross. I knew of Harry Emerson Fosdick’s dismissal of the atonement as a “slaughterhouse religion” and of Steven Chalke’s more recent charge that penal substitutionary atonement is “cosmic child abuse.” 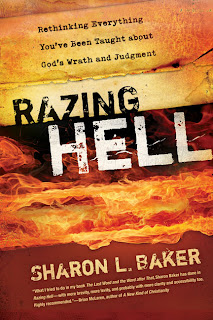 What was new to me was the discovery of “nonviolent atonement” theory. I ran across the term when I got a flyer on new academic books from Westminster John Knox Press and read the blurb for Sharon L. Baker’s new book Razing Hell: Rethinking Everything You’ve Been Taught about God’s Wrath and Judgment. Baker’s book has not gotten as much press as Rob Bell’s, but at first blush it looks like they reach similar heterodox conclusions. Anyhow, the blurb on Baker notes that she has published and spoken widely “on nonviolent atonement and hell.” That got me curious as to what exactly this meant.
A search on Amazon turned up the book by J. Denny Weaver’s The Nonviolent Atonement Theory (Eerdmans, 2001) . An editorial blurb notes:
Evangelical Christians sing hymns in which blood figures prominently; one in particular is called "Nothing But the Blood." Such Christians may have to change their tune after reading J. Denny Weaver's The Non-Violent Atonement, which proposes that the idea of "satisfaction atonement" must be jettisoned in favor of a nonviolent approach. Jesus' death, says Weaver, was not planned or sanctioned by God the Father; it was the inevitable result of sinful humans taking matters into their own hands. Perhaps the new hymn can be called "Everything But the Blood"? 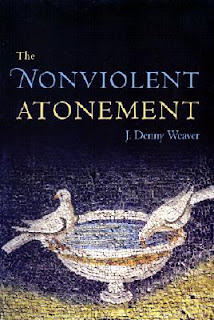 This revisioning of the atonement is apparently popular among some liberal-leaning churches and theologians in the Anabaptistic, pacifistic tradition. Baker, for example, teaches at Messiah College (an evangelical school?).
In the end, the “nonviolent atonement theory” falls flat. Why? It does not match up with scandalous passages like Romans 8:32. It reminds one of H. Richard’s Niebuhr’s well-known assessment of “social gospel” liberal Protestantism: “A God without wrath brought men without sin into a kingdom without judgment through the ministrations of a Christ without a cross."
JTR
Posted by Jeffrey T. Riddle at 1:58 PM