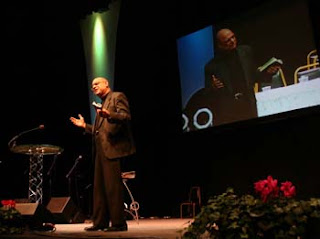 You seem to be such a sad, hate-filled, small-minded man. I hope you find happiness someday and learn to love as Jesus did.

Tozer put it like
this: "To 'accept Christ' . . . we accept His friends as our friends, His enemies as our enemies, His ways as our ways, His rejection as our rejection, His cross as our cross, His life as our life and His future as our future" (Gems from Tozer, p. 51).

It is very harmful to people to create an atmosphere in which people think that they are saved by "receiving Jesus as Savior" when they reject him in many other ways. "Receiving Jesus" means receiving Jesus for who he really is—Savior, Lord, Marriage Counselor, Vocational Counselor, Therapist, Financial Planner, Nutritional Specialist, Wardrobe Consultant, etc. To try to pick and choose the things about Jesus you find convenient to receive, rejecting the rest, is not to receive Jesus as he really is.

At least you qualified your comment by saying I only "seem" to be all the things you said. In fact, I would say I am generally quite happy and content; filled with love for my God, my wonderful wife, my beautiful children, my courageous church, and my kind friends. If by "small-minded" you mean "narrow-minded," you may well be on the right track. I do attempt to limit my thinking to what Scripture allows. I do want to love God and my fellow man as Jesus did. I agree that I very often fall short of this and pray that God would graciously help me be more like Christ.

If you have some explanation I would be happy to hear it, and if I am convinced you are right I will repent and change course. Are you open-minded enough to consider my observations on their own merit and make a reply to them, rather than attack my character? Otherwise, your comment is simply an "ad hominem" argument.

Thanks for this article. I sums up pretty well what I was feeling after this BGAV meeting.