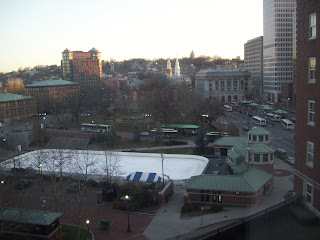 Photo: The view of Providence from my hotel window. The white steeple is the First Baptist Church.
I am back from Providence, RI and the ETS Meeting. Providence was my favorite venue for the ETS conferences I have attended so far. The Rhode Island Convention Center is a great facility and Providence is an ideal setting—easy to reach, plenty of things to see and do, great restaurants at reasonable prices, etc.
This year’s meeting did not seem as well attended as some in previous years. Among reasons I heard discussed by attendees: down turn in economy; lack of evangelical schools in close range to the meeting site; distance from the SBL Meeting in Boston, following ETS.
This year’s theme was "Text and Canon." Many of the papers were related to the topic as were the four plenary sessions.
The big news was the membership voting against acceptance of a new doctrinal "basis" that had been proposed by some members. More on this later.
The annual ETS meeting is an offering of scores of parallel break-out sessions where members present papers on various topics. There are also four plenary sessions (where one speaker addresses all attendees), a few business sessions, and a Thursday night banquet.
Wednesday (November 19):
8:30 am: I attended Darrel Bock’s (Dallas Seminary) session on Historiography in Acts.
He was reviewing a recent book by Penner on Acts and Greco-Roman historiography.
9:10 am I dropped in on a panel discussion titled: "Too Reformed to be Evangelical?" and heard a paper by D. G. Hart of the Intercollegiate Studies Institute.
Hart is an OPC elder. He argued that the evangelical movement has weakened confessional faith. He contrasted evangelicalism and the Reformed faith. Whereas Reformed faith has high view of church office bearers, evangelicalism has "thrown away the training wheels of the clergy" (quoting Nathan Hatch, Democratization of American Christianity). Evangelicalism makes faith private; whereas, Reformed view stresses importance of public worship as means of grace. He also cited evangelical compromises with Rome (see Mark Noll and Carolyn Nystrom, Is the Reformation Over?).
In discussion time he noted that Baptists aren’t truly "Reformed," because they don’t baptize babies. He prefers to call Calvinistic Baptists "Particular Baptists." The name "Presbyterian" implies a view of connectionalism in Presbyteries.
At week’s end, I would say this was one of the best papers I heard.
11:00 am: I went to Joel Beeke’s paper "Calvin on Prayer." It was vintage Beeke. Good scholarship and warm piety.
After lunch the first plenary session was by Peter Gentry of SBTS at 1:40 pm on the text of the OT. He gave a stellar overview of OT text criticism in c. 50 minutes.
In the afternoon I heard Edward Stevens (International Preterist Association) argues that the NT canon was complete by 70 AD and William Evans (Erskine College) trace "The Unraveling of the Conservative Reformed Soteriological Concensus" and perused the book exhibition area.
After supper the second plenary session on "OT Canon" was given at 7:30 pm by Stephen Dempster of Atlantic Baptist University of New Brunswick, Canada. A curiosity: Dempster used "BCE" terminology rather than "AD." Isn’t it safe to use "AD" at ETS? His conclusion on canon of OT is that it "zeroes in on David." First half of Hebrew Bible: Torah plus 4 Former Prophets; Second Half: 4 Latter Prophers plus Writings. Question: But what about the order of the canon in the Christian OT Scriptures (Genesis-Malachi)?
The evening business session began at 8:30 pm. The topic was whether or not ETS would amend its doctrinal "basis" for membership which now only requires affirmation of (1) inerrancy; and (2) the Trinity.
Two members, Ray Van Neste (NOBTS) and Denny Burke (Criswell) had recommended that ETS adopt a more defined statement. Their suggestion was that ETS adopt the doctrinal statement of the UK’s Tyndale Fellowship. You can read their proposal at AmendETS.com.
The impetus for this move has been recent challenges to the doctrinal consensus of ETS including challenges to the membership of Openness Theologians Clark Pinnock and John Saunders and, more recently, the resignation of Baylor’s Francis Beckwith as ETS President after he converted to Catholicism.
The ETS Executive Committee had recommended against adoption of the statement. A full hour’s debate was given. Among those speaking in favor of the proposal: Wayne Grudem (Phoenix), Michael Haykin (SBTS), and Albert Mohler (SBTS). Among those speaking against it: Bruce Ware (SBTS), Jim Borland (Liberty), and John Walton (Wheaton). Some of those who spoke against wanted a better doctrinal statement. Others argued that confessions were right for churches and denominations but not for academic societies. Vote was set for Friday AM.
JTR
Posted by Jeffrey T. Riddle at 5:42 PM