With Thanksgiving for Religious Freedom 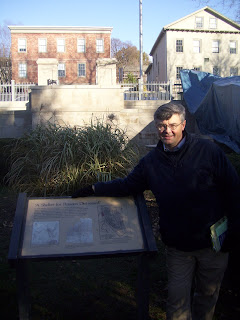 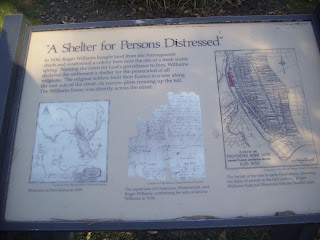 Photos: Me in front of a plaque in the Roger Williams National Memorial noting the fact that Providence was established as "a shelter for persons distressed." The building behind me on the right is the spot where Williams' own house stood.
Let each be fully convinced in his own mind (Romans 14:5).
While in Providence, Rhode Island last week for the annual meeting of the Evangelical Theological Society, I walked from my hotel one afternoon over to the Roger Williams National Memorial. Williams migrated to Boston from England in 1631 and not long after took up an assistant minister position in nearby Salem. His separatist views soon brought him into conflict with the powers that be. He criticized the Puritans in New England for not separating fully from the Church of England, and he resisted their efforts to have the civil authority impose religious conformity.
His "new and dangerous opinions" led the Massachusetts Bay authorities to convict him and plan to deport him to England. Williams barely avoided arrest and fled the colony in 1636. After spending the winter among the Wampanoag Indians, Williams made his way to the headwaters of the Narragansett Bay where he founded the city of Providence after "God’s merciful Providence unto me in my distress" and the colony of Rhode Island. This new colony became a beacon of religious liberty. The first Baptist church in America was formed by Williams in 1638. He did not remain long with the congregation, however, because he believed no church on earth could fit "first and ancient pattern" of the New Testament until Christ’s second coming. Rhode Island is home not only to the first Baptist Church in America but also the first Quaker Meeting House and the first Jewish Synagogue.
Sometimes Williams is anachronistically presented as a kind of "anything goes" bohemian. The National Park Brochure on the Williams Memorial, however, points out:
Yet Roger Williams’s belief in religious freedom should not be confused with a casual acceptance of all faiths. When he was 69, Williams rowed 30 miles from Providence to Newport for a spirited debate with the Quakers. He mistrusted a religion that relied more on "inner light" than on the New Testament. His passionate opposition to the Quakers makes it all the more significant that no Quaker in Rhode Island was ever punished for his or her religious beliefs or practices—this during a period when Massachusetts barred Quakers, hanging four of them for repeatedly returning to the colony after being expelled. The first charter of Rhode Island stated that as long as they obeyed the civil laws, all its citizens were free to "walk as their consciences persuade them."
Williams’s life proves that true religious freedom is not attained when we abandon all convictions, but when we hold firmly to our beliefs while trying to convince those who disagree through persuasion and not coercion.
This Thanksgiving we can thank God for religious freedom.
Grace and peace, Pastor Jeff Riddle
Note: Evangel article 11/26/08.
Posted by Jeffrey T. Riddle at 1:24 PM