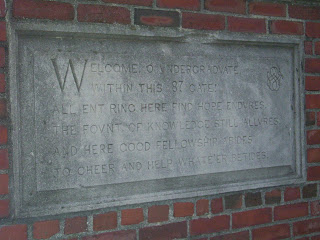 Photo: A sign on a gate at Brown University: "Welcome O Undergraduate, Within This 87 gate! All Ent Ring Here Find Hope Endures. The Fount Of Knowledge Still Allures. And Here Good Fellowship Abides To Cheer and Help Whate'er Betides."
Friday (November 21):
The morning business session was at 8:30 am. It was not so well attended as one might have expected given the disputed doctrinal proposal that was on the table. To change the ETS constitution 80% was needed. The proposal failed by a vote of 47 yes and 140 no. I voted "yes" with the minority. I do not particularly like the statement, but some guideline is needed for ETS.
9:10 am: I went to John Oswalt’s (Wesley Seminary) review of research on the book of Isaiah from 1950-1985. He noted that since Duhm’s proposal of multiple authorship of Isaiah (c. 1892) the field has radically changed. EJ Young’s commentary defending single authorship is the exception. He noted that academy scholars see all prophecy as "ex eventu" and propose intentional deception to make the book appear earlier. He noted though that this is hypocritical as those same scholars then praise the author(s) as spiritual genius(es). This was a great paper!
10:00 am: We went to hear Maurice Robinson do a very good paper on text criticism. Robinson began with an autobiographical sketch of his career, his passion for promoting the Byzantine text, and for challenging the eclectic text critical method.
10:50 am: Our final paper. We heard Dennis Swanson (Master’s Seminary) speak on Titus as a model for a modern "Consulting [interim] Pastor."
After lunch, we took another walk through Providence, touring the First Baptist Church, the Roger Williams National Memorial, the statue of Williams in Prospect Park, and taking another stroll through Brown’s campus. By late afternoon it was off to the airport to catch our flight home.