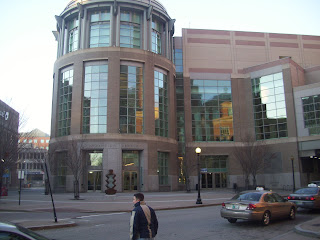 Photo: The Rhode Island Convention Center.
Thursday (November 20):
8:30 am: I went to Douglas Huffman’s (Northwestern College) "Survey of Text-Critical Issues in the Book of Acts."
9:20 am: Rob and I sat in on Timothy George’s (Beeson Divinity) "Baptists, Calvinists, and Ecumenists." He noted that the impetus for this paper was his discussion with "Father" Richard John Neuhaus on what the resurgence of Calvinism in Baptist life meant for the future of ecumenism. This was an odd talk. George noted that Baptists aren’t really Calvinists because of disagreement with Calvin on (1) paedobaptism; (2) church government; and (3) civil magistrates. Granted. He further suggested a moratorium on the term "Calvinism." He preferred to say that the Reformation was the acute Augustiniation of Christianity. He noted the common ground that Calvinists have with Arminians in their understandings of grace, sin, and regeneration.
He said the verdict was out on what Calvinism meant for ecumenism.
In the discussion, Paige Patterson of SWBTS challenged George on minimizing differences with Rome in doctrine, noting that the two of them had spent ten years in SBC-Catholic dialogue and never got an admission from their Catholic counterparts that Martin Luther was a true Christian.
George made some odd-sounding remarks throughout. I already noted his references to "Father" Neuhaus. He also made reference to the Pope as "the Holy Father in Rome." Could George cross the Tiber with Beckwith?
10:10 am: I went to hear Gregg Allison of SBTS do a paper defending the use of the multi-site church model. I did a paper at ETS with quite the opposite view two years ago.
11:00 am: I attended Mark Strauss’s (Bethel Seminary, San Diego) session "Why the ESV Should Not Become the English Standard Version." Strauss was a translator on the TNIV and it was his time to take the ESV to task from a dynamic equivalency advocate perspective. Grudem and Piper were both in the room to pose questions after his presentation.
After lunch, the third plenary session was at 12:50 pm by Dan Wallace (Dallas Seminary) on the NT Text. Wallace defended the continuing search for the "original text" of Scripture at a time when liberals (like Bart Ehrman) are abandoning such a quest. He argued for closing the gap between church and academy by having evangelical scholars let the folk in the pew understand NT text issue, noting "It’s better that they hear the truth from us." Wallace noted that in the next edition of the NET Bible (of which he is NT editor) he hopes to relegate the Pericope Adulterae and the Ending of Mark to the footnotes! He does not believe these should be in the Bible!!! I found his comments disturbing.
The fourth and last plenary followed at 1:40 pm with Charles Hill (Reformed Seminary) on NT Canon.
In the afternoon I did my paper at 2:50 pm on "Baptized Couches? Mark 7:4 and the Biblical Mode of Baptism." I later attended Robert Polcheck’s paper on the "Pastoral Implications of Revelatory Gifts" and then took more book room time.
At the evening banquet, Rob and I sat at a table with Dr. Maurice Robinson of SEBTS and some of his students, one of whom is now an IMB missionary in China. The meal was really good (clam chowder and Salmon!). ETS President Hassell Bullock (Wheaton) gave the presidential address on Wisdom and Torah in the OT.
JTR
Posted by Jeffrey T. Riddle at 5:50 PM