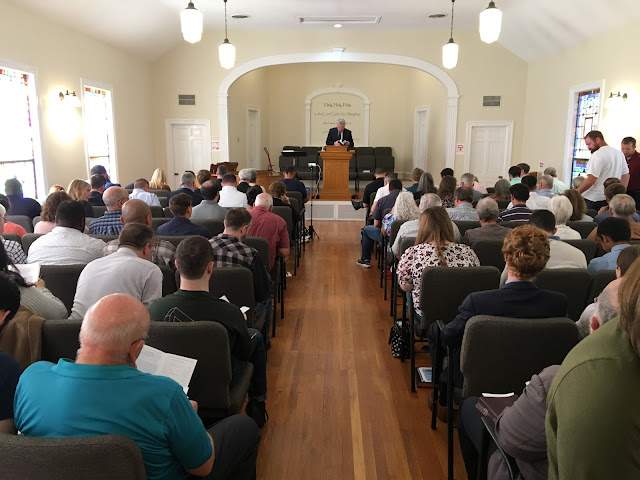 The 2LBCF-1689 teaches the necessity and benefits of “communion” among churches (see 26:14-15). Particular Baptist churches have historically realized this through formal associations and assemblies. Last Sunday pm I preached on “The Biblical Basis for Communion Among Churches” and covered these four points (bases):

The church at Antioch then sent out Paul and Barnabas on what we call Paul’s first missionary journey (Acts 13:2-3), and at the end of their journey they returned to Antioch (14:25-28).

Then, there arose a dispute at Antioch over circumcision (Acts 15:1), and the decision was made to send Paul and Barnabas as representatives of the Antioch church to the church at Jerusalem (v. 2). Not only were there living apostles in that church but also elders: “unto the apostles and elders” (v. 6).

This leads to what we call the Jerusalem Council (see vv. 4-6), which resulted in a letter or decree being issued by the council or assembly to the church at Antioch declaring that circumcision was not required. This was delivered not only by Paul and Barnabas but also by Judas and Silas, “chief men among the brethren” (see vv. 22-31).

So, here is perhaps the chief prooftext for the practice of communion among churches.

Second: The tendency of the apostles at times not only to address individual churches, but also to address groups of churches, especially those in the same geographical area.

See the introduction to Galatians (Gal 1:1-2; contrast with Phil 1:1 written to a single church).

See also Paul’s instruction to the church at Colosse and the mention of sister churches in nearby Laodicea and Hierapolis (Col 4:10-16).

And notice the beginning of Revelation as Christ addresses the seven churches of Asia Minor (Rev 1:4, 10-11).

Third: The tendency of the apostles and early churches to commend brethren from one church unto those at another.

There are many more examples of this. See the commendation of Timothy and the affirmation of Epaphroditus in Philippians 2:19-30 (the latter called a “messenger” or apostolos in v. 25).

Fourth, the apostolic assumption of some degree of uniformity of practice among the churches.

This assumes that the early churches strove for unity in faith and practice.

How did they do that? By having communion with one another.

How can we know if we share in this unity of faith and practice unless we have fellowship with other churches? It is the tendency of cults to be isolated and idiosyncratic, but of Biblical churches to be open and accountable unto other churches