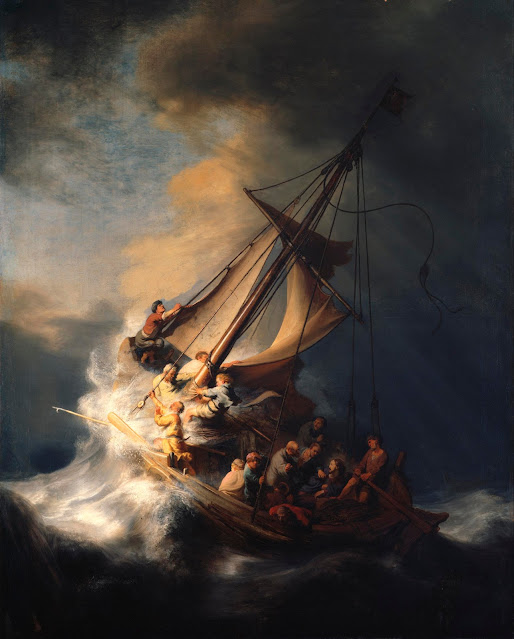 Matthew 14:21-33 records the miracle of Christ walking on the Sea of Galilee. The disciples were in a ship “in the midst of the sea,” as it was “tossed with waves” and struggling against a contrary wind (v. 24). Then, in the fourth watch of the night (c. 3-6 am), Christ came walking toward them (v. 25).

As he drew near, Christ spoke to the disciples. Notice that he ministered first to them through his words. Paul will later write that faith comes by hearing and hearing by the Word of God (Rom 10:17). He offers three consecutive statements:

First, a command: “Be of good cheer.” It is just one word in Greek, a command from a verb meaning to be confident, be courageous, be cheerful. He said this to the paralytic in Matthew 9:2: “be of good cheer.” We might paraphrase it, perhaps, as, Get-ahold-of-yourselves, or Buck-up!

Third, he commands, “Be not afraid.” Christ calls upon the disciples to push away fear as they trust in him. 1 John 4:18 says that “perfect love casteth out fear.” Trust in Christ casts out fear of circumstances, fear of death, fear of failure, fear of man.

Spurgeon said of the disciples in the storm: “How much did their case resemble ours when we are in sore distress! We are tossed about, and can do nothing; the blast is too furious for us to bear up against it, or even to live while driven before it" (Matthew, 200).

It is comforting to know that in such times, Christ says the same to us: “Be of good cheer; it is I; be not afraid.”