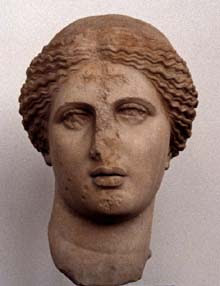 Image: Head of Aphrodite, from the Agora in Athens, defaced with crosses on forehead and chin.

1.26: Of the fact that idolatry has been subverted by the name of Christ, and by the faith of Christians, according to the prophets.

Augustine argues that the Christian stance against pagan idolatry was not a new teaching but one that is found in the Old Testament prophets. This Old Testament teaching has been preserved by the Jews, even though they reject Christianity. “Thus,” says Augustine, “the enemy of our faith has been made a witness to our truth.”

The “demolition” of the polytheistic pagan system has come from the God of Israel himself. To prove his point Augustine cites the Shema of Deuteronomy 6:4 and the second commandment against graven images (Exodus 20:4). He further notes that the Christian movement fulfills the promise to Abraham in Genesis 12, that through him and his seed the nations would be blessed. Christ’s virgin birth also fulfilled the prophecy of Isaiah 7:14. The God of the Bible has ordained the overthrow of pagan “superstitions” through Christ.

1.27: An argument urging it upon the remnant of idolaters that they should at length become servants of this true God, who everywhere is subverting idols.

Augustine notes again that the teaching against idolatry is found not only in the books of Christians (the NT) but also in those of the Jews (the OT). He further asks those pagan who have suggested that the Christian God is really Saturn, why, then, they do not worship him. Why also do they not accept his teaching that no other gods are to be worshipped? Augustine also chides the pagans for worshipping their gods in secret for fear that the Christians will take their idols and break them to pieces. He closes by suggesting that the triumph of Christianity over paganism is a fulfillment of Psalm 72:14 that all nations would serve the God of Scripture.

Augustine continues his relentless attack on paganism. Christian teachings on this topic are not new, but they are found in the Old Testament prophets. Augustine presumes that Christianity has, in fact, already triumphed over pagan idolatry.

Labels: Augustine of Hippo, Harmony of the Evangelists, idolatry, prophecy