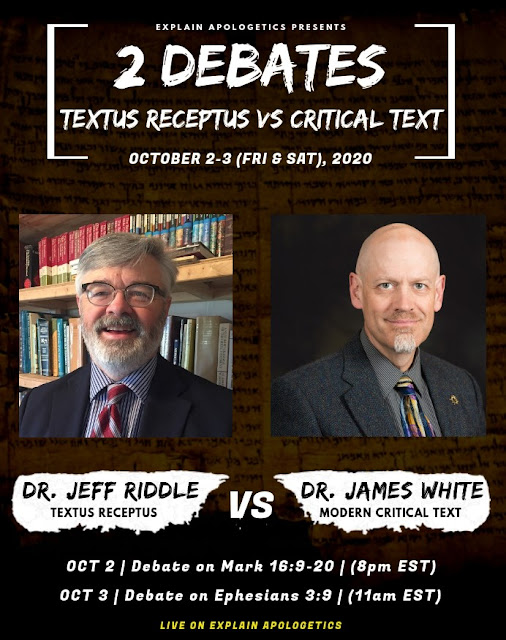 Yeah, this is happening. Where to find it:

I have been waiting for this a long time. It's very important that people that upholds the a consistent, biblical view about the Textus Receptus entering in a public debate, so more people will see how consistent ou view is. I'm prayingfor this event! God bless!

Will be praying for you Pastor Jeff and for the debate. Our Lord's grace, wisdom and peace to you.

VLB, thanks for the encouragement. Yes, I think our position is consistent and reasonable and will hope to make that point.

Mark, thanks for keeping this in prayer. Much appreciated.

Plan on listening to these. Interested in why anyone thinks any of the several so-called TRs is authoritative.

In the Confessional Bibliology Facebook group, someone asked some questions on manuscripts of Tertullian and Ephesians 3:9 (because some translations have him saying 'fellowship') and it prompted me to do some digging and I found some potentially relevant information. I'll copy my comments here:

1. I came across this issue last year when I was looking into this. I'm pretty sure it's a mistranslation, or rather the translator is confirming it to the TR (he does the same in Eph. 1:18 where Tertullian says 'eyes of your hearts' but he puts in the TR reading 'eyes of your understanding'). A list of manuscripts can be found here: http://www.tertullian.org/works/adversus_marcionem.htm
And here:
https://www.roger-pearse.com/tertullian/articles/evans_marc/evans_marc_03sigla.htm

2. There is a similar issue with the Armenian version. The Western Armenian NT on studybible.info said "fellowship" but I have no idea what it's mss basis is. It might be uninfluenced by the TR because it still omits 'by Jesus Christ'. I found images of 1 manuscript but it still read dispensation. But there might be a possibility that it is preserved in a minority of Armenian mss as well (that seems to happen with a lot of TR minority readings).

3. Tertullian says in Book 4 chapter 5, "I say, therefore, that in them (and not simply such of them as were founded by apostles, but in all those which are united with them in THE FELLOWSHIP OF THE MYSTERY of the gospel of Christ) that Gospel of Luke which we are defending with all our might has stood its ground from its very first
publication; whereas Marcion’s Gospel is not known to most people, and to none whatever is it known without being at the same time condemned." In Latin it's "de societate sacramenti" which seems to be a pretty unambiguous Latin equivalent of the Greek η κοινωνία του μυστηρίου. We may indeed have an early 3rd century reference to the TR reading!

Hopefully this is somewhat helpful.

Stuart, glad to hear that you are willing to keep an open mind on these things. If you have not listened to any of the Word Magazine podcasts, I'd encourage you to review the archive and listen to some of the episodes that might catch your interest with regard to defense of the traditional text:

So, you say you are interested to hear "why anyone thinks any of the several so-called TR is authoritative" (sic).

Here are some questions to consider:

1. What do you make of the fact that all of the printed TR editions include the major traditional passages, now disputed by the modern critics, like the traditional ending of Mark (Mark 16:9-20) and the Woman Taken in Adultery (John 7:53--8:11)?

2. Can you list for me what you consider to be the five most important of the relatively small number of generally minor differences in the limited number of printed TR editions?

3. Can you tell me which of the modern critical editions you find to best represent the Greek NT? Do you agree with the NA 28 which puts Mark 16:9-20 in brackets or the Tyndale House Greek NT which includes it in the text without brackets? Why?

4. Do you agree with the NA28 decision to include a reading at 2 Peter 3:10 based on no extant Greek evidence? Why or why not?

CC, you are amazing. We can add this to your other valuable finds on Ephesians 3:9. Thanks for your research. Sharing here is fine. You can also email me: info.crbc@gmail.com

Thanks for your ongoing willingness to engage in this debate.

My prayer is that you and Dr. White would table and debate your positions with brotherly charity and a fixed eye to the glory of God, by His grace enabling... that truth would emerge and, where either side has error, that it would become evident, accepted, and corrected as such.

And where the truth emerges, that Pastors and Professors would humbly and boldly take up the matter, and it to the Pew; and that by such means as this, if only in part, God being the first cause would ever preserve and protect His settled Word that lives and abideth forever, and that by Him for His names sake.

Remember, the Complutensian Polyglot NT (1514) has οἰκονομία at Ephesians 3:9.

"Fellowship" is well defined in the context in Ephesians 3:6, "That the Gentiles should be fellow-heirs, and of the same body...," whereas in Ephesians 3:2 "dispensation" is more of a time frame as also in the context with the Ephesians 1:10 reading, "That in the dispensation of the fulness of times he might gather together in one all things in Christ, both which are in heaven, and which are on earth; even in him"

Further the mystery itself in context is defined clearly by Paul as "This is a great mystery: but I speak concerning Christ and the church" Ephesians 5:32 (KJV). The Jews, the Gentiles, and all men now in 'fellowship' with Christ, "the fellowship of the mystery" revealed in God's timing 'of the dispensation of the grace of God..." Ephesians 3:2 (KJV).

The debate "fellowship" based on TR's κοινωνία as opposed to "dispensation" based on Maj, Byz, NA/UBS's οἰκονομία gets us off the train tracks of what the context of the whole of Ephesians is clearly telling us. Then where is the consistency such as “all men” see what is the fellowship (πάντας) Ephesians 3:9 in the very same verse, with “all” omitted in the NASB even with TR, Maj, Byz, Sinaiticus, and P46 support? Where is the consistency in the science here? To me, “precept upon precept, precept upon precept, line upon line, line upon line, here a little and there a little” (Isaiah 28:9-13) is left by the wayside here as we drift off into left field “doting about questions and strifes of words” (I Timothy 6:4), rather than using the formula of context as a proper interpretation of scripture. After all, is not that what the debate is about, to know what God said here in Ephesians 3:9?

And let us not ignore the omission of “Jesus Christ” is this very same verse, also having TR AND Majority support, for without Jesus Christ there would be no ‘fellowship of the mystery.’

Will be praying for your debates Pastor Jeff. Please consider the context of the whole of Ephesians in my previous posts, and regarding the ending of Mark and once again the context of the whole N.T., the Holy Ghost would never end something with "for they were afraid" (Mark 16:8) vs, ..."conforming the word with signs following. Amen" (Mark 16:20). All the 3 other gospels all end with a positive word, and a big AMEN!!! Can I get an Amen brother?

But be careful, White may just use those 2 out of 5800 Greek manuscripts to convince you otherwise, lol.