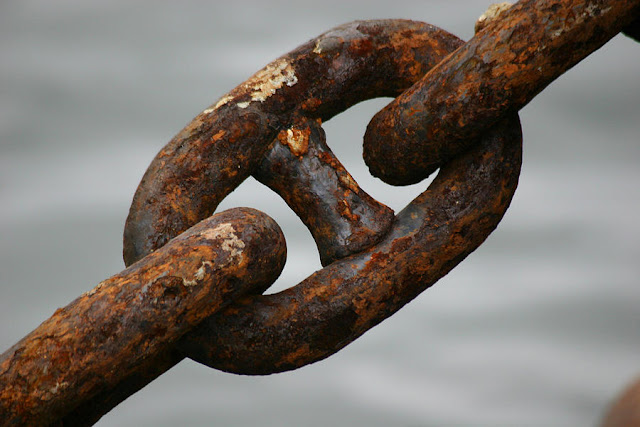 James 1:14 But every man is tempted, when he is drawn away of his own lust, and enticed. 15 Then when lust hath conceived, it bringeth forth sin: and sin, when it is finished, bringeth forth death.

In Romans 8:29-30, Paul describes what has been called “the golden chain” of redemption, and in James 1:2-4 we described what we called James’s “golden chain” of perseverance.

These “chains” provide a series of interconnected events or actions that lead to some glorious end, according to the design of God.

Now, in James 1:14-15, the apostle describes what might be called the “rusty chain” of temptation. This, however, is not a positive chain. It is not a golden chain but what we might call a “rusty” one.

The first link in this chain is “lust” (in Greek it is plural: “lusts”). The Greek word epithumia means a desire, a longing, or a craving. But the word entails a desire that is inordinate or ungodly. It is a desire that trespasses beyond the bounds of what is holy, good, and right.

We typically think of lust as referring to inordinate sexual desire, as when Christ taught that the man who looks at a woman lustfully (using a verb from the same root of the word used here) has committed adultery in his heart (Matt 5:28).

But there are many other lusts or desires, including lust for power, lust for control, lust for revenge, lust for anger, lust for money, lust for dominance, etc.

The rusty chain of temptation begins in the heart of sinners, even in the hearts of believers (who still battle with sin), when they are governed by any inordinate desire or lust.

This desire draws a man away and entices him. Sin promises pleasure, but it delivers pain. Proverbs 20:17 says, “Bread of deceit is sweet to a man; but afterwards his mouth shall be filled with gravel.”

The second link in v. 15a is sin itself. This tells us that there is a difference between the idea of sin and the doing of the deed itself. But notice the imagery here. It is reproductive and gestational. Desire conceives the enticement to sin that, if nurtured and fed, will give birth to the monster of actual sin itself.

The third link in v. 15b is death. The monster child of sin “when it is finished” (when it reaches maturity) leads to death. This last link is simply an alternate expression of Romans 6:23: “The wages of sin is death.”

There is a warning here: Do not be enticed by temptation. Do not give yourself over to wicked desires. Do not let these lead to actual transgressions. The end result will be death, not merely physical death but spiritual death, what the Scriptures sometimes call “the second death” (Rev 2:11; 20:6).