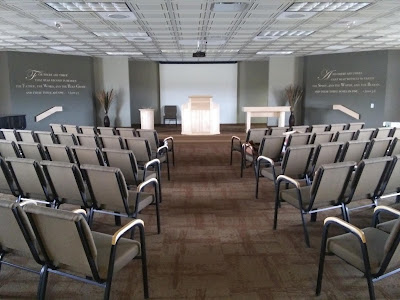 Image: The meeting house of Five Solas OPC, Reedsburg, Wisconsin, with the CJ printed on either side of the pulpit.

It is certain that there are parts of the traditional text that are particularly vulnerable to the withering attacks of modern criticism. One of those parts is, without doubt, the Johannine Comma (1 John 5:7-8), now routinely removed from many modern New Testaments (both Greek and versions). In some modern translations it is not even mentioned in the footnotes. See my recent presentation on the CJ.

Our defense of this and other disputed texts should not make us fainthearted, since we defend them as Gamaliel did the apostles, “for if this counsel or this work be of men, it will come to nought, but if it be of God, ye cannot overthrow it; lest haply ye be found even to fight against God” (Acts 5:38b-39).

I was recently discussing this circumstance with a couple of likeminded pastors and, aside from the obvious that we might do to defend these words, including using translations that incorporate them and preaching and teaching from them, other ideas were also mentioned, including incorporating them into the worship liturgy and even into the visual art of a church meeting house.

First, with respect, to singing, in Grantley McDonald’s Biblical Criticism in Early Modern Europe, he notes a Trinitarian hymn composed by the Puritan William Barton (c. 1598-1678) in response to Owen’s defense of the CJ (p. 133):

Three witnesses there are above,
And all these three are one:
The father, Son and sacred dove,
One deity alone.

The Living father sent the son,
Who by the Father lives:
And unto them that ask of him
The holy Ghost he gives.

Note: This is the text as printed by McDonald. I assume it is faithful to the original punctuation and capitalization. The footnote and bibliography notes this as hymn XC in Barton’s A Century of Select Hymns. Collected Out of Scripture (London, 1659). It is set to the common meter tune (same as "Amazing Grace", "O God Our Help in Ages Past" etc.) and could be easily incorporated into worship.

Second, with respect to visual art, the Five Solas OPC Church in Reedsburg, Wisconsin has recently added a tasteful gold-leaf lettering of the CJ in its meeting house (see above), on each side of the pulpit,  a helpful visual reminder of the doctrine of the Trinity (WCF 2:3) and that worship is directed to the Triune God alone (WCF 22:2).

There are, no doubt, similar and even more creative ways in which things like this might be done in use and defense of the sacred text.

Thanks for posting that photo Dr. Riddle,