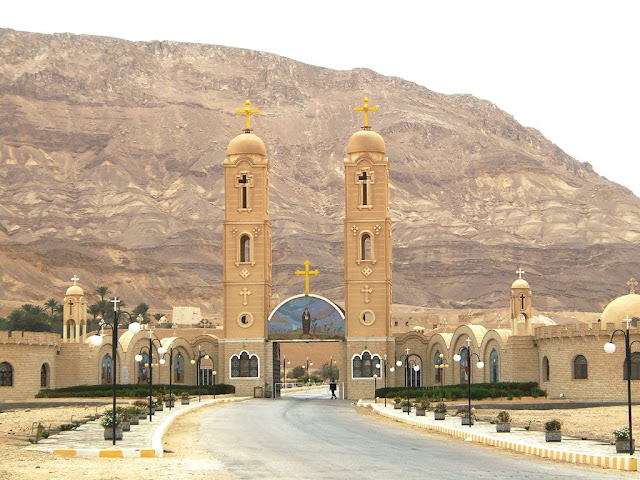 Image: Modern entrance to the Coptic Orthodox Monastery of St. Anthony in the Eastern Desert of Egypt. It is considered by many to be the oldest Christian monastery in the world, founded c. 251.

A new installment is posted to the series on Eusebius of Caesarea’s The Ecclesiastical History: book 2, chapters 16-17 (listen here).

Eusebius begins by relaying the tradition that Mark was the first to take the gospel to Alexandria, Egypt, before he went to Rome to be with Peter and to compose his Gospel.

Eusebius then draws on Philo of Alexandria’s work On the Contemplative Life and his description of the Therapeutae, an ascetic spiritual group near Alexandria.

Eusebius claims that the Therapeutae were, in fact, a Christian sect. Like the early Christians described in Acts they gave up their possessions and held their goods in common in order to follow their “philosophy.” He describes their practices of fasting and their allegorical interpretations of their Scriptures. He assumes their sacred Scriptures to have included the Gospels, the writings of the Apostles, and expositions of the prophets, like those found in Hebrews (which he assumes was written by Paul). He emphasizes the extremes of their fasting with some not eating for three days or barely eating over six days.

Eusebius acknowledges that some might be skeptical of his claim that the Therapeutae were Christians. Indeed, most would see them as a Jewish sect.

He further notes that men and women lived separately and practiced chastity. They also followed patterns (like fasting and keeping vigils to celebrate “the Passion of the Savior”) and practices, which Eusebius says, were still followed by Christians in his day.

Though his claims that the Therapeutae were Christians seems dubious, the description shows the developing interest in early Christianity in monasticism and ascetical spiritual practices like chastity and fasting.