WM 98: The Ending of Mark, Syriac, and Metzger 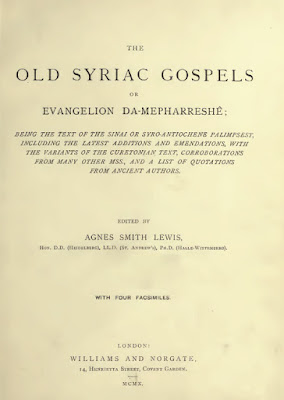 I have posted WM 98: The Ending of Mark, Syriac, and Meztger (listen here).

Here are my notes from this episode:

In this episode of WM I want to return again to the ending of Mark.

I did a paper presentation on this topic (“The Ending of Mark as a Canonical Crisis”) which was published earlier this year as an article in the PRJ (find it here).

I continue to hear from folk who read that article and who have been encouraged or influenced by it.

I recently received, for example, a note from a brother in SE Asia:

Dr. Jeff thank you very for this article that you had uploaded, I had watched your interview in youtube Meggido radio about the Greek text of the New Testament. and it help me a lot to get rid of my confusion regarding which Greek text is more accurate or "godly." there are many explanations that I've heard in both sides (TR and CT), that really got me into confusion. I went to a seminary, before still not finished, and my Profs. told us about textual criticism, and it's hard for me to accept every thing that they are saying, He even told us that the book of Ephesians was not been written by Paul?

Dr. Gurry’s feedback: Why no reference in my Ending of Mark article to the Sinaitic Syriac?

I wanted to return to another feedback that I got just after the article came out. This was feedback that came from Dr. Peter Gurry of Phoenix Seminary. Dr. Gurry does not believe Mark 16:9-20 is original, but he does believe it is inspired and should be part of the canonical text of Mark (the same position as Metzger; oddly enough, John MacArthur has a more radical position on Mark’s ending than Metzger!).

I noticed there is no mention of the Sinaitic Syriac. Was this intentional? Its text is, per Metzger, as early as late 2nd/early 3rd century and it lacks the Longer Ending. This is a problem for you claim on p. 39 that there is no “inkling of controversy” in this period. I note this manuscript is also missing from the extended quote of Lunn at the end. I also noticed there was no mention of the Sahidic Coptic or 308 cited in NA28.

And here was my response to this (which I posted, along with his question and with his permission in a blog post):

My main focus was to survey the Greek mss. evidence for the traditional ending, so I did not give much focus to the versional evidence, which is extremely scanty pre-300.

If I revise the paper I will try to add something on the Sinaitic Syriac. Of this, notice two things:

1.    Metzger/Ehrman say the work was copied in the fourth century (so it would be post-300), though they speculate that it preserves “the form of the text” from the “beginning of the third century” (p. 96). No footnote or source is cited.  This seems speculative to me at best, so I did not include this as a sure pre-300 witness to the ending of Mark.

2.    Metzger/Ehrman also note that the Sinaitic Syriac (a palimpsest) was not discovered at St. Catherine’s on Mt. Sinai till 1892 (p. 96). This means that it had no bearing in WH’s decision to end Mark at Mark 16:8 in their 1881 Greek NT. This decision by WH was based on the evidence of Sinaiticus and Vatincanus, not the Sinaitic Syriac.

As for the Sahidic Coptic, the NA28 apparatus notes two or more mss. ending at 16:8 but does not identify or date them. In the discussion in Metzger/Ehrman no specific Sahidic mss. are cited which are pre-300 (see pp. 110-112).

As for 304 (I assume this is what you meant rather than 308) my understanding, drawn from J. Snapp, was that the ending of this ms. is damaged, so that it is not a valid witness for the ending. Also, according to the NA28 it is dated to the XII century so it is not relevant for the pre-300 discussion.

I tried to stress my overall focus on the Greek mss. in the first line of the second paragraph on p. 35 when I wrote (emphasis added): “Upon examination of the early Greek manuscript evidence for the ending of Mark, one can tentatively suggest at least three distinct periods or phases in the early transmission of the ending of Mark.”

On p. 39 I made this statement regarding the pre-300 evidence for the ending of Mark: “If we had only the evidence from this period we would hardly have any inkling of controversy over the text of Mark, but would assume the Traditional Ending as the undisputed conclusion of the second Gospel.” In light of the evidence, I think this statement is accurate. We do not, for example, have any patristic evidence of any dispute about the ending, which we do find (in Eusebius, et al) post-300.

Review: Three periods in the transmission of Mark’s ending:

So, I wanted to go back to this conversation. In my article I suggest three distinct periods in the transmission of Mark’s ending:

First: The emergence period (from the writing of Mark to c. AD 300).

Finally, the paper essentially suggests a fourth period, the current era, in which the consensus is being challenged.

This is why they seem to be willing to stretch the versional evidence as far as they think it will go, including speculating that the Sinaitic Syriac ms., though dated to the fourth century, actually goes back to, as Gurry puts it, to the “late 2nd/early 3rd century.”

This assessment seems to rest on a shaky foundation.

The NA28 on the Syriac evidence for Mark’s Ending:

Let’s look first at the Syriac evidence as noted in the apparatus of the NA28:

The traditional ending is found in three Syriac traditions:

The Curetonian Syriac (a single ms.);

The Harclean Syriac (an edition issued in 616 by Thomas of Harkel [Harclea]).

It is absent in one Syriac tradition:

The Sinaitic Syriac (a single ms.)

Metzger/Ehrman on the Syriac NT:

They note “five different Syriac versions of all or part of the NT” (p. 96), from oldest to youngest:

The Old Syriac, the Peshitta, the Philoxenian (dated to 508), the Harklean (dated to 616), and the Palestinian.

Note: Metzger/Ehrman: “One of the most confused and confusing tangles of textual criticism involves the unraveling of the Philoxenian and/or Harklean versions….” (p. 99).

Of the Old Syriac, they note that this is “preserved today in two manuscripts” (p. 96).

The first is the Curetonian Syriac, a parchment ms. in the British library, edited by William Cureton in 1858. Again this includes the traditional ending.

The second is the Sinaitic Syriac “a palimpsest manuscript that Agnes Smith Lewis discovered in the monastery of St. Catherine on Mount Sinai in 1892” (p. 96).

Question: Could it have been translated from Codex Sinaiticus or a related ms?

The description that follows is vintage Metzger:

He begins, “Though these manuscripts were copied in about the fifth and fourth centuries respectively….” Note: He dates the Curetonian to the fifth century and the Sinaitic to the fourth but gives no reason, explanation, or supporting footnote for this dating. Does this reflect his bias that the earliest must be the one that omits the traditional ending? If so, then his argument is circular.

He continues, “…the form of the text that they preserve dates from the close of the second or beginning of the third century.” Note: Again, no reason, explanation, or supporting footnote is given. How is this anything more than speculation?

And he adds: “When the two manuscripts are compared, it is seen that the Sinaitic Syriac represents a slightly earlier form of text than does the Curetonian, even though in some places it may have corruptions that the Curetonian has escaped” (p. 97). Note: Again, no reason, explanation, or supporting footnote is given. We are apparently expected to accept the word of the expert. But has he drawn this conclusion based upon his own presuppositions? Example:

The first proposition, however, is only assumed and never proven.

Second: One should be aware that those who reject the traditional ending of Mark may be willing to stretch the versional evidence to support their conclusions.

Third: If one who rejects the traditional ending of Mark gives as a reason its absence in the Syriac, one should respond that it is missing in only one Syriac ms, the Sinaitic Syriac. Considering it came from St. Catherine’s it may have been translated from Codex Sinaiticus or a ms. like it. Even if dated to the fourth century, it would be post-300. The only other “Old Syriac” ms., the Curetonian, does, in fact, include the traditional ending of Mark.

Fourth: The traditional ending of Mark clearly became widely accepted in the Syriac tradition, as evidenced by its inclusion in the Syriac Peshitta of which, according to Metzger and Ehrman we have over 350 mss, “several of which date from the fifth and sixth centuries” (p. 98). Note: This inclusion is also of interest canonically, given that the Syriac Peshitta only included 22 books (excluding 2 Peter, 2-3 John, Jude, and Revelation) (see Metzger/Ehrman, p. 98).

Fifth: Far from arguing against the antiquity of the traditional ending of Mark, the evidence from the Syriac actually offers strong support for it.

Just a little qualification about 304:

<< my understanding, drawn from J. Snapp, was that the ending of this ms. is damaged, so that it is not a valid witness for the ending. >>

304 is damaged, but the damage does not seem to account for who 304's text of Mark ends with 16:8. It is a *tenuous* witness for the abrupt ending -- tenuous, because (1) it is unclear whether the copyist of 304 was working from a damaged exemplar, (2) it is unclear whether or not 304 was volume 1 of a 2-volume set of Gospel-commentaries, in which case the remaining verses might have been part of the other volume's first segment, and (3) there is something weird going on in the commentary-material that accompanies the final segment of text.

Don't forget the Syriac support for the inclusion of Mark 16:9-20 in the writings of Aphrahat (c.337) and Ephrem Syrus' Commentary on the Diatessason (mid-300s).