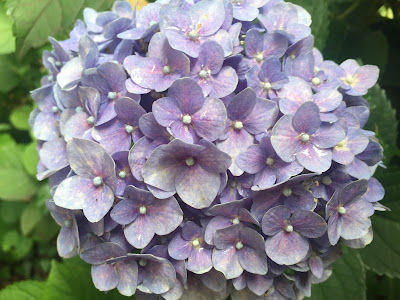 Note: Devotion taken from last Sunday's sermon on John 1:47-51.
And he saith unto him, Verily, verily, I say unto you, Hereafter ye shall see heaven open, and the angels of God ascending and descending upon the Son of man (John 1:51).
This is an allusion to an account from the OT from the life of Jacob when he fled from the wrath of his brother Esau and had a dream at a place he later called Bethel. Compare:
Genesis 28:12 And he dreamed, and behold a ladder set up on the earth, and the top of it reached to heaven: and behold the angels of God ascending and descending on it.
Jesus tells Nathaniel: The “greater things” (v. 50) that you will see is a ladder that extends between men on earth and God in heaven, and there will be messages that are going back and forth by means of that great ladder.
Jesus refers to himself here as the Son of man. This is a title that was especially preferred by Jesus when he talked of his suffering. Compare:
Mark 8:31 And he began to teach them, that the Son of man must suffer many things, and be rejected of the elders, and of the chief priests, and scribes, and be killed, and after three days rise again.
We should be careful of seeking out types from the OT, but here is a type that comes with the authority of Christ himself. What does it represent? Some moment in Christ’s ministry of deep communion with God (his transfiguration? his prayerful agony in the garden?).
I think that ladder is most likely a reference to the cross work of Christ. More than that, it is the man who extended his body on the cross, who stretched out his arms upon the cross, who laid down his life upon the cross. The ladder is the Word become flesh.
Jesus tells Nathaniel that he will see something greater, and this will be the rightful basis for faith in me. It will be understanding his death on the cross for sinners and his resurrection from the dead granting life to those who believe. Discipleship is not discipleship until it unfolds the significance of the cross and the empty tomb.
Calvin comments on this verse:
In short, this passage teaches us, that though he whole human race was banished from the kingdom of God, the gate of heaven is now opened to us, so that we are fellow-citizens of the saints, and companions of angels (Eph 2:19) and that they, having been appointed to be guardians of our salvation, descend from the blessed rest of the heavenly glory to relieve our distress.
We have a ladder: He is the Lord Jesus Christ.


Grace and peace, Pastor Jeff Riddle
Posted by Jeffrey T. Riddle at 9:59 AM