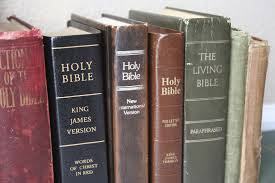 I am teaching an online Survey of the NT class this summer. At the start of the class I require students to read an article I wrote titled “A Brief Guide to English Bible Translations” [Note: The article provides an overview of various translations and provides a list of translations approved for use in the class. To reduce costs, the class is an “open source” course, so I give the students freedom to make use of their choice of translation, as long as it is not a paraphrase.]. I then have them post to a discussion board a report on what translation they plan to use for the class.

Here is a summary of the preferences reported by students in the discussion board posts from the summer 2017 class (with 30 enrolled students):

The overall preferred translation was the KJV. For KJV users, a common reason offered for use was that this was the version the person had grown up using in their church or family. Examples:

“I will use the KJV because that is the version that I grew up with and am most familiar with.”

“My grandfather believes that the only correct version is the KJV….”

The KJV “is what I grew up using.”

The KJV is “what I’ve used since I was younger growing up in the church.”

One said, “I’ve grown up learning from this bible.”

Another said this was “my grandmother’s bible” and it might be a good idea “to start passing [it] down to new generations.”

Some noted a preference for the KJV based on its style:

One noted the KJV is “simple and easy to understand.”

Another noted she preferred the KJV because it is the “most poetic.”

While others specifically noted they preferred a modern translation over the KJV due to style:

One noted, “it can be a little daunting and makes for exhausting reading if it’s not in plain English.”
The second most preferred translation was the NIV. Several noted this was the version they owned or regularly used. Students said:

The NIV “is the copy I have received and read … most of my life.”

One student noted he had read little of the Bible but received a copy of the NIV “as a graduation present” from his family’s church.

Another said the NIV was the version “my parents got me for Christmas.”

Some noted a preference for the NIV based on style. Comments:

“I find the NIV much easier to follow, obey, and understand.”

“I appreciate the simplicity in which it is written.”

Preferences for other translations were scattered. One said she was using the ESV because this was the version she had, and another noted that a new pastor in the church had just switched church usage from the KJV to the ESV. The lone NRSV user noted this had been the version used in a previous religion class.

I find these responses to be typical of those that I have received from earlier offerings of this course. These responses show that despite the prevalence of modern translations, the KJV still maintains a significant grip as the traditional text for English speakers. BTW, most of the students are younger (under age 30). When many think of the English Bible, they still think of the KJV. Among modern translations, the NIV is clearly the most widely read and preferred. Other evangelical (NKJV, ESV, etc.) or mainline Protestant (NRSV) translations register only scattered acknowledgement.

These findings suggest that Mark Twain’s quip might be well applied to the KJV: “rumors of my death have been greatly exaggerated.” For more on this, see my related 2014 blog post on this topic.