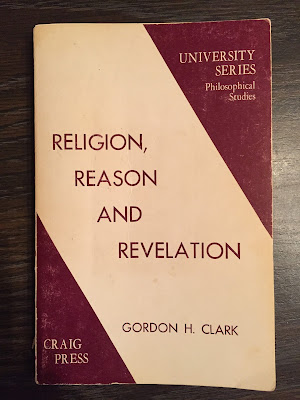 This book is a collection of five chapters/essays from Reformed philosopher and theologian Gordon H. Clark.

In this essay Clark examines modern attempts to define the term religion and to evaluate whether Christianity can be categorized as a religion. He looks at two main methods of defining religions: the psychological approach and the comparative approach.

First, the psychological approach sees religion as an emotional, non-rational experience. This results, Clark argues, in a definition “so broad and vague that it covers an unmanageable variety of experience” (p. 17). In this scheme, “The Hindu mystic, the apostle Paul, the dictator, and the miser are equally perfect examples of religion” (p. 17).

Second, the comparative approach classifies “religions” into various families in comparison to one another in the way botanists classify plants. One problem with this approach is that it cannot define elements common in all religions. Buddhism, for example, does not even suggest the concept of God.

Finally, Clark turns to examine Biblical Christianity. At the outset, he notes, “Surely, the images, medals, beads, and other paraphernalia of Romanism is not the same religion as iconoclastic Puritanism” (p. 23).

Clark defines Christianity as “Calvinism,” as articulated in the Westminster Confession of Faith (pp. 23-24). He is unapologetic about starting from this conviction: “There is no hypocritical claim that the argument is without presupposition” (p. 24).

From this confessional perspective, the various religions, as idolatrous distortions, proliferate after the fall: “The religions of today therefore are descendants of the one original religion….” (p. 25). Christian conversion cannot be compared with supposed Hindu conversion. The Christian view of sin is not the same as in the various religions. Modern scholars of religions, “can neither appreciate or even understand the Christian doctrine of human depravity” (p. 27).

To summarize Clark’s conclusions: Christianity is not just one religions among many. It cannot even be compared to them. They are false. The only true religion is Biblical, confessional Christianity.

Clark presents four subheadings for approaching the relationship between reason and faith:

Clark: “The cosmological argument for the existence of God, most fully developed by Thomas Aquinas, is a fallacy. It is not possible to begin with sensory experience and proceed by formal laws of logic to God’s existence as a conclusion” (p. 35).

Second: Reason without Faith: Modern philosophy, from Descartes to Hegel.

Clark’s summation: “The rationalism of the seventeenth century, British empiricism, the critical philosophy of Kant, and now Hegelianism have all tried and have all failed to justify knowledge. Reason apart from revelation has come to grief. The only remaining possibility of escaping revelation now is to abandon reason. It is a bitter pill for man to swallow, but some men would rather wallow in abysmal ignorance than accept information by the grace of God” (p. 68).

Clark’s conclusion: “This type of philosophy is self-contradictory, self-destructive, and intellectually stultifying” (p. 87).

He thus proceeds: “Therefore I wish to suggest that we neither abandon reason nor use it unaided; but on pain of skepticism acknowledge a verbal propositional revelation of fixed truth from God. Only by accepting rationally comprehensible information on God’s authority can we hope to have a sound philosophy and a true religion” (p. 87).

Clark begins by noting that, contrary to various rationalistic views, reason and faith “are not antithetical but harmonious,” but that this harmony is not of the “Thomistic variety” (p. 87). He adds that, contrary to irrational views, faith has “an intellectual content” (p. 87).

For historical background, Clark begins with fundamentalism, which, he says, “cannot be entirely condemned nor entirely commended” from a Westminster perspective (p. 88). “Fundamentalism’s firm attachment to a few doctrines saves it from the excesses of irrationalism, but at the same time the fundamentalists can hardly be said to embrace a wholehearted intellectualism” (pp. 88-89).

Clark rejects the attempt to drive a wedge between reason and faith:

“Thus the common modern contrast between the head and the heart is evidently unscriptural” (p. 94).

Regarding the assertion that faith is more than intellectual “assent,” Clark adds: “Just because one intellectual act, the understanding of what words mean, is less than faith, it does not follow that faith or belief is not intellectual” (p. 99).

And later: “Faith is something internal, mental, intellectual” (p. 100).

This leads Clark to assert, “that faith in God is impossible without a creed” (p. 101).

There is no conflict between reason and faith. “The futility of rationalism and the insanity of irrationalism are to be avoided” (p. 110).

This chapter asks: Is language a “fit instrument for revelation”? Can divine revelation offer solutions to the problems of language? (p. 111).

Clark discusses the orthodox view of the inspiration of Scripture but distinguishes this from a mechanical “dictation” view (pp. 115 ff.). He confides, “it has been my experience that liberal theologians misunderstand, misrepresent, and even misquote the orthodox authors” (p. 117).

After surveying modern linguistic theories that challenge whether language can be a proper vehicle for revelation, Clark advocates “theistic linguistics,” which assumes “that God Omnipotent has created rational beings, beings who are not merely physical but who are essentially spiritual and intellectual, beings therefore who have the innate ability to think and speak” (p. 134).

This view stands, in particular, against logical positivism which says “that religion and metaphysics is nonsense,” making this philosophy “an enemy of all religion” (p. 146).

Clark concludes, “One cannot write a book or speak a sentence that means anything without using the law of contradiction. Logic is an innate necessity, not an arbitrary convention that may be discarded at will” (pp. 149-150).

For the Christian, morality is “grounded on Biblical revelation” (p. 151).

Clark examines two humanistic attempts which reject revelation but try to find a logical ground for morality: Utilitarianism and Instrumentalism (Dewey). Unsurprisingly, he finds both wanting.

In contrast to these, Clark presents Christina ethics, based on the sense of the Bible as “determined by the Westminster Confession” (p. 183). The Bible presents God as “the moral governor and judge of the world” (p. 183).

Clark concludes; “Neither Utilitarianism, nor Kant, nor Dewey can anticipate God’s standard of rectitude” (p. 193).

The final chapter looks at the problem of evil, concluding that only “the system known as Calvinism and expressed in the Westminster Confession of Faith offers a satisfactory and completely logical answer” (p. 194).

Clark rejects the “free will” defense to the problem of evil, concluding: “Certainly, if the Bible is the word of God, free will is false; for the Bible consistently denies free will” (p. 206).

The only satisfying answer come in Reformation theology, as expressed in the Westminster Confession, “the high water mark of Protestantism.” He adds, “Though some circumscribed souls may be astonished, this is what Christianity is” (p. 213).

Clark looks, in particular, at chapter 3 of the WCF “Of God’s Eternal Decree.” God has willed all things that come to pass. Does Calvinism introduce “self-contradiction into the will of God”? (p. 221).  God says, “Thou shalt not kill.” Still murders take place in the world. No, says Clark, we must distinguish between the preceptive and decretive will of God. “God’s decretive will, as contrasted with his percepts, causes every event” (p. 222). “If Arminians had a keener sense of logic –they would not be Arminians!” (p. 222).

Does Calvinism make men puppets? No, says Clark. Calvinism denies free will, not that men have wills. “Calvinism most assuredly holds that Judas acted voluntarily. He chose to betray Christ. He did so willingly” (p. 227). “A choice is still a deliberate volition even if it could not have been different” (p. 228).

Does this make God unjust? Clark answers: “But those who hold to the sovereignty of God determine what justice is by observing what God actually does. Whatever God does is just” (p. 233).

Is God the cause of sin? Clark responds:

Let is be unequivocally said that this view certainly makes God the cause of sin. God is the sole ultimate cause of everything. There is absolutely nothing independent of him. He alone is the eternal being. He alone is omnipotent. He alone is sovereign. Not only is Satan his creature, but every detail of history was eternally in his plan before the world began; and he willed that it should all come to pass…. (p. 238).

Does to say that God is the “cause of sin” mean he is also “the author of sin”? Clark draws on the WCF distinction between “first and secondary causation” (p. 239). God is the ultimate cause of everything, including sin, but he is not the “author” (immediate cause) of sin.

“God is neither responsible nor sinful, even though he is the ultimate cause of everything” (p. 239).

“The sinner therefore, and not God, is responsible; the sinner alone is the author of sin. Man has no free will, for salvation is purely of grace; and God is sovereign” (p. 241).