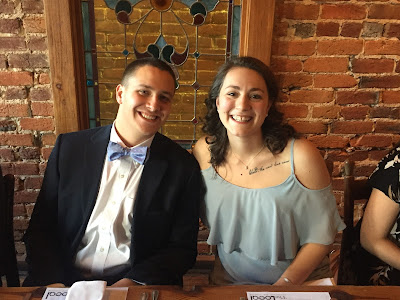 Image: Zach and Hannah at their rehearsal dinner, the Local Restaurant in Belmont (3.18.17).

I had the honor of conducting the wedding service for two young people from CRBC on Sunday afternoon. The sermon was taken from Ecclesiastes 4:9-12. At one point I noted that for Christians marriage is an act of discipleship. Your partner will likely shape your spiritual life more than any other human being, save Christ himself. A man lives 18 years in his parents’ household, but, very often many more with his wife.

In his essay “Toil and Flame,” on Polish author and artist Jozef Czapski (in A Defense of Ardor), Adam Zagajewski observes: “A religious temperament doesn’t kill a sense of humor—just the opposite, it shapes, develops it” (p. 97).

Zagajewski in “Against Poetry” from the same:

Contemporary mass culture, entertaining and at times harmless as it may be, is marked by its complete ignorance of the inner life. Not only can it not create this life; it drains it, corrodes it, undermines it. Science, caught up in other problems, likewise neglects it. Thus only a few artists, philosophers, and theologians are left to defend this fragile, besieged fortress (p. 138).

I’m listening to George Eliot’s Middlemarch on LibirVox. From chapter 8: When Sir James says the pretentious Rev. Casaubon “has got no good red blood in his body,” Mrs. Cadwallader responds, “No, somebody put a drop under the magnifying glass and it was all semi-colons and parentheses.” On Dorothea’s poor decision to marry Rev. Casaubon, Sir James says a person ought to have “perfect liberty in misjudgment.”

Baseball practice has begun. This is my thirteenth year at Cove Creek and third consecutive year coaching the Cove Creek Major League Pirates. Opening day is April 8. There is nothing for a Dad quite like coaching his sons in baseball.

Christian Wiman in a 2014 “Socrates in the City” interview with Eric Metaxas on being a well-known poet: “Being a famous poet is like being famous in your family.” That made me think of the adage, recalling a series of concentric circles of ever decreasing size, that there’s being famous, being “Christian” famous, being “Reformed Christian” famous, and being “Reformed Baptist” famous. Being a famous Reformed Baptist would be like being famous in your family.