New Book: The Pericope of the Adulteress in Contemporary Research 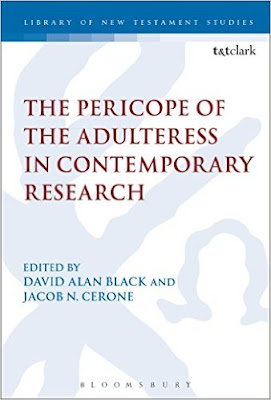 The book produced from the 2014 conference at SEBTS on the Pericope Adulterae (see my report here) is available for pre-order from Bloomsbury/ T & T Clark.  Unfortunately the price is high (Amazon lists the kindle price at $67.19 and the hardback at $104.46)!  The 2008 book edition of the SEBTS conference on the ending of Mark was printed by B & H Academic in paperback at a much more reasonable price.  I guess there’s always inter-library loan.

Larry Hurtado, the only contributor to the book who was not part of the SEBTS symposium, describes this book as now being the “go-to” resource for text-critical study of the PA (see his blog post on the book here).  Hurtado, of course, sides with Knust/Wasserman/Keith in rejecting the originality of the PA, but I find his “heretical” statements against text-critical orthodoxy in this post to be interesting.  He sees the PA as an inexplicable late addition.  What about the possibility it was early [original, in fact, to John], went through a period of suppression from some corners, but tenaciously persisted and prevailed?

Hurtado's blog is a treasure. I don't check it as often as I should, so thinks. I noticed that he had also posted on the ever receding recension theory, also. https://larryhurtado.wordpress.com/2016/04/07/the-retreating-claim-of-an-early-nt-textual-recension/

I have never been convinced that the PA was suppressed in the earliest manuscripts. I can't see why it would have been,nor to I believe that the early copyists would have done such a thing. Perhaps more likely to me is that it was part of the oral tradition that was associated with John. But, as a believer in the pews today, it strikes me as a story that has all the earmarks of authentically about Jesus as John would have told it. it is not hard to imagine that earlier Christians would have felt the same.

I dropped you a note to your church email address re: the Dungan book. Best wishes.

One of these days, you're going to write something and I'm going to understand what you're writing about.

2. The book is based on papers given at a conference at Southeastern Baptist Seminary in Wake Forest, NC in 2014.

3. The book is expensive, much more expensive than a 2008 book based on a conference at the same seminary on the ending of Mark (Mark 16:9-20) a few years ago.

4. One contributor, Larry Hurtado, a well known and respected academic scholar, contributed an article to the book and had some interesting things to say on his blog challenging the general academic consensus on how the NT supposedly developed (though he certainly does not support the traditional or confessional text).