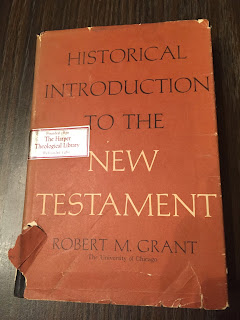 One of the things I have frequently noted in discussing text criticism is the fact that the general academic understanding of the goal of text criticism has significantly shifted and changed over the last few decades.  In the nineteenth and early twentieth century, the goal was the recovery of the original autograph.  In contemporary text criticism this goal is seen as both impossible (since the closest one can do, according to modern text scholars, is approximate the text as it stood c. AD 200-300)  and inappropriate (since the text of the Bible is not set in a rigid form but is a “living” text).

This shift in emphasis can especially be seen in the work of D. C. Parker (see The Living Text of the Bible [Cambridge, 1997], Textual Scholarship and the Making of the New Testament [Oxford, 2014]).

Recently, I have run across several folk who have noted that this shift in definition of the goal of text criticism was already being anticipated and articulated in the mid-twentieth century.  One frequently cited comment is that of Robert M. Grant of the University of Chicago in his Historical Introduction to the New Testament (Harper & Row, 1963):

The primary goal of New Testament textual study remains the recovery of what the New Testament writers wrote. We have already suggested that to achieve this goal is wellnigh impossible.  Therefore we must be content with what Reinhold Niebuhr and others have called an ‘impossible possibility.’  Only a goal of this kind can justify the labours of textual critics and give credit to their achievements and to the distance between what they have achieved and what they have hoped to achieve (p. 51).

Indeed, Grant and others were already anticipating the “restorationist” goal of text criticism as an “impossible possibility.”  Perhaps if traditional Christians would come to understand this shift they would also realize the risks inherent in giving stewardship of their Bibles over to modern academic text criticism.  Then, they might also see the winsome stability of the Confessional Text.

As important as the debate over the text of scripture is, I think that the most important battle is over the dating and authorship of scripture. It really means nothing to have the autographs if the very character of the writings can be called into question. In my reading, I have found that traditional authorship and dating are denied for mostly obtuse and superficial reasons, which have as their underlying assumption the impossibility of predictive prophecy.

There seems to be a frantic attempt to date the gospels to any time after 70 AD, and any reason whatsoever seems to be good enough. The cause of this position, though unstated, seems clear: If Christ could predict the fall of Jerusalem, then he must be Divine; a conclusion that some would like to avoid.

Thanks for the comment. I agree that the issues of authorship and date are also important. Yes, the anti-supernaturalistic bias of the academy must assume that all prophecies of Jerusalem's destruction in AD 70 are ex-eventu. And it must also undermine the authorial authenticity. I do not think concerns to defend traditional views on authorship and date, however, are exclusive of concerns to establish the proper text of the Bible In fact, these issues are sometimes related (e.g., titles preserved in mss., the Pauline subscriptions, etc.).