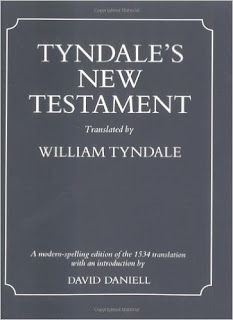 I recently began reading through David Daniell’s “modern-spelling edition” of Tyndale’s 1534 English NT (a revision of Tyndale’s original 1525 work) [Yale, 1989]. Of interest is the canonical ordering of the books.  As in the 1525 edition, Tyndale follows the order:

Of note, in particular, is the order of the General Epistles wherein he begins with the Petrine and Johanine epistles and then lists Hebrews, James, and Jude (followed by Revelation).  As with the 1525 edition, Tyndale followed the order of books in Martin Luther’s 1522 NT (see the discussion in David Daniell, William Tyndale:  A Biography [Yale, 1994]:  pp. 110, 119-124).  Luther’s moving of Hebrews, James, and Jude (followed by Revelation) out of the typical order reflected his sense of these books having a secondary importance. Though Tyndale follows this order, he does not appear to share Luther’s “canon within the canon” sentiments.  The interesting thing to note is that at this point there is no “standard” way to order the NT books in an English translation, because, prior to 1525 there were no English translations of the NT from the original Greek.  Tyndale’s English translation of the NT has a lasting impact but his (Luther’s) canonical order was not, in the end, embraced.

Also of interest is Tyndale’s prologue to Hebrews.  With regard to authorship, he retains the traditional title “The Epistle of St. Paul Unto the Hebrews” but observes, “Now whether it were Paul’s or no I say not, but permit it to other men’s judgments, neither think I it to be an article of any man’s faith, but that a man may doubt of the author” (p. 345).

He notes the objections registered by some against the canonicity of Hebrews, based, in particular, on its theology of repentance, conversion, and apostasy in various passages. He mentions chapters 6, 10, 12, in particular.  There are no verse divisions in the work (the first Greek NT with verse divisions was Stephanus’ fourth edition of 1551 and the first English Bible with verse divisions was the Geneva Bible in 1560).  In the end, Erasmus defends the treatment of these topics in Hebrews and concludes his prologue by asking, “And seeing the epistle agreeth to all the rest of the scripture, if it be indifferently looked on, how should it not be of authority and taken for holy scripture?” (p. 347).