Notes on Augustine's "Harmony of the Gospels": Part 3: Defending the Gospels Against Pagan Objections 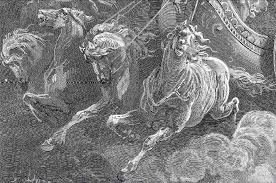 Notes from Book One (chapter vii):


Augustine begins by describing the four Gospels as “sacred chariots of the Lord … in which He is borne throughout the earth and brings people under His easy yoke and light burden.”  Still there are those who bring “calumnious charges” against them and attempt to rob them “of their credit as veracious historians.”  In particular Augustine responds in this work against those who accuse the four Gospels of standing in “antagonism” against each other, for the chief charge of critics is “that the evangelists are not in harmony with each other.”


Direct reference to critics and their works is rare in this section, but we can glean some of the basic charges being made as well as Augustine’s defense.  Here are a few:


1.  Some questioned the fact that Jesus wrote nothing but that testimony concerning him must rely on the writings of his followers.


2.  At the same time, it is charged that “the disciples claimed more for Jesus than he really was; so much so that they even called Him the Son of God, and the Word of God, by whom all things were made, and affirmed that He and God are one.”


3.  These critics say that Jesus should be honored as “the wisest of men; but they deny that He is to be worshipped as God.”


The pagan charge that Jesus left no written material is disingenuous given the fact that the noblest and most respected of the great philosophers also left no written accounts of their lives, but they were written about by their followers (e.g., Pythagoras, Socrates).  “What reasonable ground, therefore, have they for believing, with regard to those sages, all that their disciples have committed to record in respect of their history, while at the same time they refuse to credit in the case of Christ what his disciples have written on the subject of his life?”


If Jesus was the wisest of men, as they claim, did he not have the ability to make trusted disciple who could accurately record his life and teaching?  And if this is the case, why do they not believe the Gospel records of Jesus’ life?  Why do they not acknowledge Jesus to be God?
JTR
Posted by Jeffrey T. Riddle at 11:09 AM

Labels: Augustine of Hippo, Harmony of the Gospels