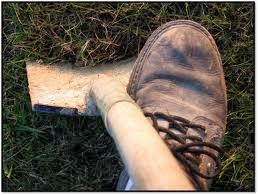 Note:  The last two Sundays I have preached on The Works of the Flesh and The Fruit of the Spirit in Galatians 5:19-23.  Here are some notes from my exegetical spade work on the text of Galatians 5:19-21:
The problem:


In Galatians 5:19-21 Paul provides a list of “the works of the flesh.”  The question is how many items should be included in the list.  The traditional text lists 17 items, while the modern-critical text lists only 15 items, omitting “adultery [moicheia]” (v. 19) and “murders [phonoi]” (v. 21).  Note:  There are also a few other more minor variations (e.g., v. 20 traditional reads ereis; modern critical, eris; v. 20 traditional reads zeloi; modern critical, zelos).


Here is a look at external evidence for these two variants from the Nestle-Aland apparatus:


The word is included, among other early Greek manusctipts, in the second corrector of Sinaiticus, D, F, G, and Psi, as well as in the vast Majority of manuscripts.  Among versions, it is found in the Harklean Syriac.  In the Church Fathers it is found in a Latin translation of Irenaeus (c. 395 AD), in Cyprian (d. 258 AD), and in Ambrosiaster (366-384 AD)


It appears in Alexandrinus, C, D, F, G, and Psi among other Greek manuscripts, including the vast Majority.  It also appears in the Old Latin, the Syriac Peshitta, and the Coptic Bohairic, as well as the Church Father Cyprian (d. 258 AD).


It is not included in p46, Sinaiticus, Vaticanus, and a few other Greek manuscripts, as well as a few Vulgate manuscripts and the Coptic Sahidic version.  Among Church Fathers, it is not included in Marcion (according to Epiphanius; c. second century AD), the Latin of Irenaeus (c. 395 AD), Clement of Alexandria (d. c. 215 AD), and Ambrosiaster (366-384 AD).


Again, let us consider each of these variants:


Metzger does not offer any discussion of this variant in his Textual Commentary.  One can understand how the word might have been accidentally omitted.  Harder to understand is why it might have been added if not originally present.  This is not to say that it does not serve as an appropriate introduction to the cluster of “works” which deal with sexual sin (fornication, uncleanness, lasciviousness), “adultery” seems to be a fitting opening to the list, much as “love” properly introduces the corresponding “fruit of the Spirit” (vv. 22-23).  The Westminster Shorter Catechism notes that the seventh commandment properly forbids not only physical adultery but also all unchaste thoughts, words, and deeds (cf. Jesus’ interpretation of the commandment in Matt 5:27-28).  To remove the term would disrupt the natural flow of the list.


The possibilities for copying errors are immediately apparent with this example.  The preceding term is “envying [phthonoi],” a word that differs from “murders [phonoi]” by a single letter (theta).   Metzger concedes that a “wide range of witnesses” read phthonoi phonoi and that “the shorter reading may have originated in accidental omission due to homeoteleuton” (Textual Commentary, pp. 597-598).  Nevertheless, he adds that majority of the UBS committee “was impressed by the age and quality of the witnesses” supporting the omission of “murders.”  Thus, they were “inclined to think that phonoi was inserted by copyists who recollected Ro. 1.29” (Ibid., p. 598).  Is it really feasible to think, however, that a copyist would be influenced by Romans 1:29 when copying Galatians?  Even Metzger and the UBS could only assign the omission a “D” reading (Ibid., p. 597).


The traditional list of 17 “works of the flesh” has strong, ancient attestation.  It was the reading adopted by the vast Majority of Greek manuscripts and, thus, the reading most accepted in early Christian usage.  To remove “adultery” would disrupt an appropriate opening to the cluster of words which follow related to sexual sin.  The possible accidental scribal omission of “murders,” in particular, is very easy to understand in light of its close similarity in spelling to “envyings.”  One can only think that these two words came to be omitted in the modern-critical text, because they are omitted in Sinaiticus (original hand) and Vaticanus.  We must conclude, however, that there are weighty and convincing reasons to maintain the traditional reading.
JTR
Posted by Jeffrey T. Riddle at 2:00 PM

Thank you for sharing. I had a friend ask me recently about a James White Video, and some of his assertions there. I shared this post to him as another example of Textual corruption. If you are interested, the video I was referring to is at:

Thanks for the post and video link. Maybe some time I can do a Word Magazine analysis of/response to the video.

Thanks for being out there and taking the time to address these issues. I pray that many Bible believing Christians will find this, and find it helpful. God bless.

As far as the James White video, I did post my response on my blog. My friend is in New Mexico, so we are limited on Communication. Here is the link if you are interested. I certainly don't mind your critique. http://thewildernessroad.blogspot.com/2014/03/which-bible-translation-is-most-reliable.html

Thanks for this post. I am currently studying a few biblical topics, and beginning to see some of them intertwined somewhat. I am pondering if the works of the flesh is not a detailed list of fornication(s) or imoralities, not just sexual imorality as most commonly believed and taught. The NRSV list fornication first. If my pondering is correct, then I think it would explain "an uncleanness" in Deaut. 24, and also the regarding Christ words, "exceot for the cause of fornication". Also notice in what we often refer to as the ten commandments; that having no other gods (idolatry), disobedience (keeping the sabath), stealing, murder, adultery, lying, and coventing all are listed and separate, but fornication is not listed. Could fornication not be listed in what we call the ten commandments, because the fornications are listed separately already? Just my thoughts. Again thanks for sharing.