Andrew Fuller: "My Lord and Master Requires the Heart" 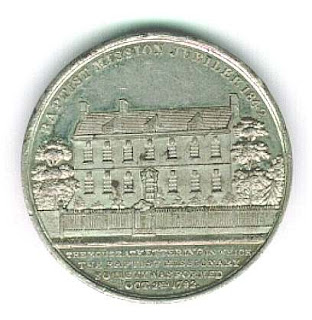 Last Sunday afternoon I gave a biographical message on The Life and Legacy of Andrew Fuller (1754-1815).  To prepare I re-read the biography of Fuller written by his son, Andrew Gunton Fuller and included in the first volume of Fuller's Collected Works.
There are lots of good anecdotes about Fuller that I did not have time to use on Sunday.  Here's one related to Fuller's fundraising efforts on behalf of the Baptist Missionary Society:
On a certain occasion he [Fuller] called on a pious and benevolent nobleman, who, though a churchman, was friendly to Dissenters, and was generous in his charitable contributions. Having laid before him the operations of mission; his lordship handed him a guinea [a British coin of the era worth about one pound]. Mr. Fuller, observing that it was given with an air of indifference, asked, --“My lord, does this comes from the heart?” “What matter is that?” inquired the nobleman; “suppose it does not come from the heart, it may answer your purpose as well. If you get the money, why should you care whether it come from the heart or not?” “Take it back,” said the man of God, “I cannot take it. My Lord and Master requires the heart.” “Well, give it me back,” said the nobleman, “it did not come from the heart.” He took the guinea, and stepping to his desk, drew a check on his banker for twenty pounds, and handing it to Mr. Fuller, said, “This comes from the heart. I know the principles by which you are governed. I love the Lord Jesus Christ and his cause, and know that no offering is acceptable to him unless it come from the heart.”
--From The Complete Works of the Rev. Andrew Fuller, Vol I: pp. 67-68.
Posted by Jeffrey T. Riddle at 2:46 PM

That reminds me of a similar incident in the life of George Muller. What principles they had.

I think there's little like the biographies of Godly men to inspire us to live more Godly.
Blessings, Anne