The Directory for the Publick Worship of God: Part 1 of 16 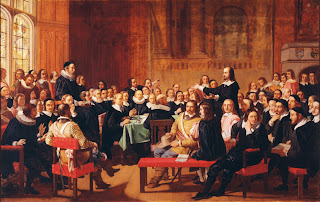 It is interesting to note the distance the reformation had travelled by this point; indeed at the reformation preaching itself was banned as something which could not be safely entrusted to ministers. This is the origin of the Book of Homilies, which served all preaching needs until such time as ministers could be tested and licensed to preach. By the time the Directory is introduced such confidence has been enjoined to the ministers that they are entrusted not only with preaching but also with setting out the liturgical detail itself.

The concept I believe to be good and proper, yet the English experience with the Book of Common Prayer has however shown that even with a small margin of flexibility some ministers will hasten to introduce the most repugnant of heresies; indeed the first things to appear are usually prayers for the dead, an epiclesis, and a concept of eucharistic oblation. In many ways, it is good to tie the hands of ministers, that they find it hard to sin with them!