The Directory for the Publick Worship of God: Part 2 of 16 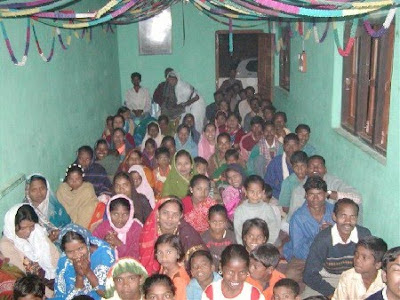 Image:  An evangelical church gathers in a pastor's home in India
Of the Assembling of the Congregation, and their Behaviour in the Publick Worship of God.
WHEN the congregation is to meet for publick worship, the people (having before prepared their hearts thereunto) ought all to come and join therein; not absenting themselves from the publick ordinance through negligence, or upon pretence of private meetings.
Let all enter the assembly, not irreverently, but in a grave and seemly manner, taking their seats or places without adoration, or bowing themselves towards one place or other.
The congregation being assembled, the minister, after solemn calling on them to the worshipping of the great name of God, is to begin with prayer.
"In all reverence and humility acknowledging the incomprehensible greatness and majesty of the Lord, (in whose presence they do then in a special manner appear,) and their own vileness and unworthiness to approach so near him, with their utter inability of themselves to so great a work; and humbly beseeching him for pardon, assistance, and acceptance, in the whole service then to be performed; and for a blessing on that particular portion of his word then to be read: And all in the name and mediation of the Lord Jesus Christ."
The publick worship being begun, the people are wholly to attend upon it, forbearing to read any thing, except what the minister is then reading or citing; and abstaining much more from all private whisperings, conferences, salutations, or doing reverence to any person present, or coming in; as also from all gazing, sleeping, and other indecent behaviour, which may disturb the minister or people, or hinder themselves or others in the service of God.
If any, through necessity, be hindered from being present at the beginning, they ought not, when they come into the congregation, to betake themselves to their private devotions, but reverently to compose themselves to join with the assembly in that ordinance of God which is then in hand.
Comments and reflections: We should note the emphasis on the necessity of public worship gatherings (cf. Heb 10:25). Reverence is upheld and superstition is rejected (e.g., bowing, etc.).  Worship begins with the solemn prayer of a minister of the Word of God. The worshippers are admonished to refrain from “private whisperings, conference, salutations,” etc., as well as “all gazing, sleeping, and other indecent behavior.” There is nothing new under the sun. Guidance is also provided for reverent behavior by late-comers to the assembly.
JTR
Posted by Jeffrey T. Riddle at 12:36 PM

I'm glad I'm not the only one who's noticed how distracting it is when those who come late 'catch up' by performing all kinds of private ritual when they arrive in the pew! Good stuff. I've set my mind to purchase a copy of the Directory for reference.