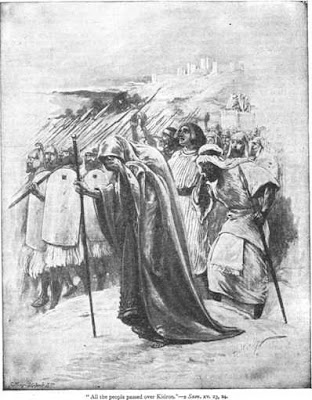 Image:  David in flight
Hushai the Archite:
Hushai the Archite was a man of intense loyalty and inspired cunning. In 1 Chronicles 27:33 he is called “the king’s companion.” When David prepared to flee in the face of Absalom’s treason, Hushai came out to meet him “with his robe torn and dust on his head” (2 Sam 15:32). David told the faithful Hushai that if he joined his entourage in flight he would only be a “burden” to him (v. 33), so he sent Hushai back to Jerusalem to serve as his stealth agent in Absalom’s court (v. 34). He was joined there by other David loyalists including Zadok and Abiathar the priests (v. 35). “So Hushai, David’s friend, went into the city. And Absalom came into Jerusalem” (v. 37). According to David’s plan, Hushai infiltrated Absalom’s court, became Ahithophel’s nemesis, and defeated and his counsel. The Lord would use Hushai to defeat Absalom’s rebellion and restore David to the throne.
JTR
Posted by Jeffrey T. Riddle at 6:19 PM