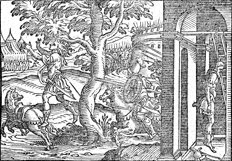 Image:  The deaths of Absalom and Ahithophel
Ahithophel:
Ahithophel the Gilonite had been one of David’s counselors, but he became a turncoat and went to Absalom’s side when he saw that “the conspiracy was strong; for the people increased continually with Absalom” (2 Sam 15:12). He proved to be a petulant advisor. When things did not go his way, he ended his life by his own hand.
It must have been like a dagger to the heart when David was told, “Ahithophel is among the conspirators with Absalom”; David petitions, “O LORD, I pray, turn the counsel of Ahithophel into foolishness” (15:31).
Ahithophel arrived with the rebel prince in Jerusalem when David fled. He gave counsel to Absalom to take his father’s concubines so that “the hands of all who are with you will be strong” (16:21). Great deference was given to any counsel that came from this man. “Now the advice of Ahithophel, which he gave in those days, was as if one had inquired at the oracle of God” (16:23). Despite the honor given him by men, the Lord would frustrate his plans and schemes. David had left behind Hushai the Archite to “defeat the counsel of Ahithophel” (15:34). Ahithophel urged Absalom to immediately pursue David and offered to lead a company of twelve thousand men himself (17:1). Hushai, however, frustrated this advice by urging delay: “The advice that Ahithophel has given is not good at this time” (17:7). Absalom sided with Hushai concluding, “The advice of Hushai the Archite is better than the advice of Ahithophel” (17:14). Behind it all was the purpose of a sovereign God: “For the LORD had purposed to defeat the good advice of Ahithophel, to the intent that the LORD might bring disaster on Absalom” (v. 14).
Ahithophel knew that the rebellion would fail. He had chosen the wrong side. Unable to handle a situation over which his Machiavellian advice was not followed and over which he had no control, he determines that he will at least arrange his own exit. “Now when Ahithophel saw that his advice was not followed, he saddled his donkey, and arose and went home to his house, to his city. Then, he put his house in order, and hanged himself, and died; and he was buried in his father’s tomb” (17:23).
Posted by Jeffrey T. Riddle at 5:00 PM