Homecoming and Revival Meetings at Nomini 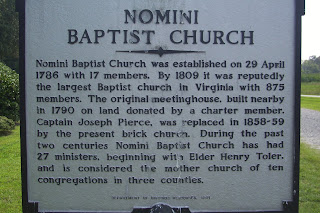 I am back in the Northern Neck this week. Yesterday, I had the privilege of preaching for the annual Lord's Day Homecoming service of Nomini Baptist Church in Montross, Virginia (the county seat of Westmoreland County). I preached on Acts 2:42 "Four Marks of the Church."
The church is 223 years old! the historical marker above notes its founding in 1786 under Elder Henry Toler. It was at one time the largest Baptist church in the Commonwealth. According to the church's records, in 1845 they reported 335 white and 583 black members. It also boasted a library of over 200 volumes. It has been the mother church for ten congregations, including Beulah Baptist Church (founded 1885) which I served from 1992-97 and which lies just a few miles down Route 3 on the border between Westmoreland and Richmond Counties. 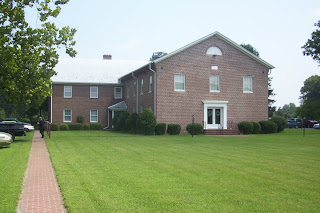 Side view of the simple but elegant meeting house, built just before the Civil War (1859). The central section (the sanctuary) is original with the wings added a hundred years later (1959). The bricks for the old meeting house were made in a kiln in the church yard by the men of the congregation from clay and sand they had harvested from nearby land. Twenty nine men from the church and the Pastor, George Bagby, served in the Confederate States Army. As with many other Baptist churches in the South, the black members withdrew after the great war to establish their own congregation. Galilee Baptist Church, formed in 1868, is just down the road. 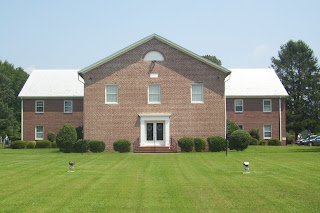 Frontal view of the meetinghouse and its lawn. 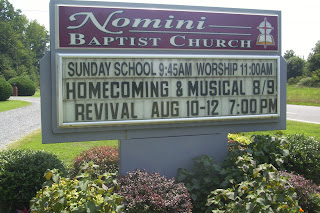 A modern sign on Route 3 announces the week's special events. I will be preaching each evening at 7:00 pm. Though it is called a "Revival" we know full well this is not something we can manufacture but only God can send down. It is the custom in this area to have "special music" at each of these services in addition to preaching. Tonight (Monday) a men's group from Galilee Baptist will sing. Wednesday a group from Beulah will sing.