The Work of One Who Lives 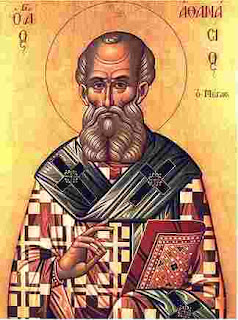 And if Christ is not risen, your faith is futile; you are still in your sins! (1 Corinthians 15:17).
How do we know that Jesus is truly risen from the dead? In his treatise "On the Incarnation," the Christian apologist Athanasius (c. 296-373 A. D.) argued that we know Christ is risen because we see his ongoing activity in the lives of men and women whom he changes:
Dead men cannot take effective action; their power of influence on others lasts only till the grave. Deeds and actions that energize others belong only to the living. Well, then, look at the facts in this case. The Savior is working mightily among men, every day He is invisibly persuading numbers of people all over the world … to accept His faith and be obedient to His teaching. Can anyone, in the face of this, still doubt that He has risen and lives, or rather that He is Himself the Life? Does a dead man prick the consciences of men, so that they throw all the traditions of their fathers to the winds and bow down before the teachings of Christ? If He is no longer active in the world, as He must needs be if He is dead, how is it that He makes the living cease from their activities, the adulterer from his adultery, the murderer from murdering, the unjust from avarice, while the profane and godless man becomes religious? If He did not rise, but is still dead, how is it that He routs and persecutes false gods, whom unbelievers think to be alive, and the evil spirits whom they worship? For where Christ is named idolatry is destroyed and the fraud of evil spirits is exposed; indeed, no such spirit can endure that Name but takes to flight on the sound of it. This is the work of One Who lives, not of one dead; and, more than that, it is the work of God.
In the name of the risen Lord, Pastor Jeff Riddle
Note: Evangel article 3/19/08.
Posted by Jeffrey T. Riddle at 4:03 PM

The documented behavior and lives of the Apostles and their followers is to me the most convincing argument for the resurrection. How does one explain how a group of people went from hiding for their lives to boldly proclaiming the Gospel? Eleven of the twelve were martyrs. Maybe one person would die for a lie or a mistaken belief, but eleven?

The efforts to explain this away (collusion, mass hallucination, etc) are more outrageous than to believe in the risen Lord.