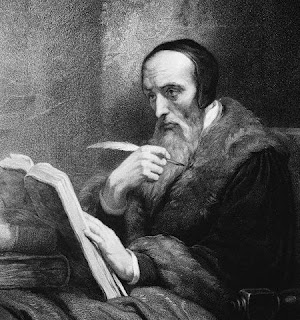 This series is an occasional, verse by verse, exposition of the book of Jude. An archive of past articles are available at the "Jude Exposition" label below.
Jude 1:8 Likewise also these dreamers defile the flesh, reject authority, and speak evil of dignitaries.
In this verse Jude continues his attack on the false teachers, "ungodly men" (v. 4) who have crept into the church. They are the objects of God’s wrath and their doom is certain (see vv. 5-7). Jude 1:8 continues the description of their depravity in three specific areas:

First, they "defile the flesh." Jude refers to them as "dreamers." The Greek participle here comes from the verb enypniazomai, which is also the root for the English verb "to hypnotize." These men apparently claimed to have ecstatic visions or dreams in which they said that God communicated directly with them. They relied on dramatic spiritual experiences rather than sober judgement. Jude accuses these dreamers of defiling the flesh. Perhaps this meant sexual immorality (see v. 7). These dreamers were likely antinomian (law rejecters), claming that what they did in the body did not matter.
Second, they "reject authority." The AV renders the phrase, "despise dominion." These men would not submit to the authority of God, to the authority of Scripture, and to the authority of the apostles. Perhaps they were also unwilling to submit to the authority of the elders in the local churches. They did not want anyone telling them how to believe or how to live. They would not accept correction or discipline. The result was disorder and chaos.
Third, they "speak evil of dignitaries." This is admittedly difficult to interpret. The noun "dignitaries" is the plural of the Greek word for "glory" (doxa). The verb "speak evil" is usually translated "blaspheme" (blasphemeo). So, it might be translated, "they blaspheme glories." What are the "glories"? Some take it to mean "glorious beings" and so "celestial beings" (NIV) or "angelic majesties" (NASB). They are in rebellion at every level, rejecting God, men, and angels.
Jude is bold in this denunciation of these false teachers. Even as a father is willing to fight against an intruder who threatens his family, or a shepherd is willing to attack a wolf who threatens his flock, Jude is zealous to defend his people from error. He is zealous "to contend earnestly for the faith" (v. 3).
Application: