Who first took the gospel to China? 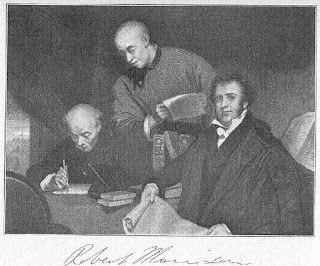 My daughter Hannah is working on a report on China and she asked me, "Who was the first missionary to China?" When she had looked up the question in secular electronic encylopedias she had found the names of Roman Catholic missionaries, but she wanted to know who was the first to bring the faith of the Reformation to China. I did not know the answer offhand, so we did a little sleuthing together and the name of Robert Morrison (1782-1834) emerged.

According to The Oxford Dictionary of the Christian Church Morrison was the "first Protestant Missionary in China." A Presbyterian, he went to Canton in 1807. As with most pioneer missionaries, his first task was Bible translation. He completed the NT in 1814 and the OT in 1818. He also completed a six volume Chinese Dictionary in 1821 that was the standard such work for many years. According to S. M. Houghton's Sketches From Church History, Morrison labored seven years before he saw his first Chinese convert to Christ.

Remembering a man like Morrison puts our life's work and goals in proper perspective. Will we also live for Christ?