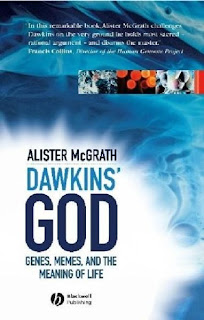 Alister McGrath, Dawkins’ God: Genes, Memes, and the Meaning of Life (Oxford: Blackwell Publishing, 2005): 202 pp.
This book is an examination and critique of Oxford "Professor of the Public Understanding of Science" Richard Dawkins and his crusading efforts to promote Darwinian atheism. McGrath had been a committed atheist as a young man but later converted to Christian faith. He also has training both in the natural sciences (biochemistry) and in theology. This makes him more than adequately prepared for presenting this critique of Dawkins’ views.
One of McGrath’s chief criticisms is aimed at Dawkins’ contention that science might somehow disprove the existence of God. Science cannot answer the God question: "The scientific method is incapable of delivering a decisive adjudication of the God question. Those who believe that it proves or disproves the existence of God press that method beyond its legitimate limits, and runs the risk of abusing or discrediting it" (p. 53). McGrath is keen to downplay the assumption of an inherent contradiction between Christian faith and science, including evolution. Though expressing admiration for Dawkins’ critique of William Paley in The Blind Watchmaker, McGrath notes that Christian theologians, including Cardinal John Henry Newman, also rejected Paley’s views as inadequate on theological grounds. On the other hand, he notes that many Christians did not see incompatibility between embracing both Christian faith and the theory of evolution. McGrath observes, "As a matter of historical fact, Darwinism was not perceived to entail atheism by the best informed judges of the time" (p. 77). He points to Darwinian scientists like Ronald A. Fisher, Charles D. Walcott, and Theodosius Dobzhansky who were also professed Christians. McGrath contends that although evolution might lead one to adopt an agnostic position (a term coined by Darwinian advocate T. H. Huxley) on the God question, it by no means necessarily leads to atheism.
McGrath also takes Dawkins to task for his characterization of all religious belief as mere "blind trust." Dawkins mistakenly assumes that belief in God is equivalent to believing in Santa Claus or the Tooth Fairy. McGrath responds:
This is a school boy argument that has accidentally found its way into a grown-up discussion. It is as amateurish as it is unconvincing. There is no serious empirical evidence that people regard God, Santa Claus and the Tooth Fairy as being in the same category. I stopped believing in Santa Claus and the Tooth Fairy when I was about six years old. After being an atheist for some years, I discovered God when I was eighteen, and have never regarded this as some kind of infantile regression…. I have yet to meet anyone who came to believe in Santa Claus or the Tooth Fairy late in life (p. 87).
In his "anti-religious rhetoric" Dawkins comes to a definition of faith that "bears no resemblance to what Christians believe" (p. 89). McGrath also turns Dawkins’ argument around and asks how this contemporary popular interpreter of science can be so sure that atheism is true. McGrath asks, "Is atheism itself a faith?" and "Is science a religion?" (see pp. 91-96). Along these lines, McGrath points to the problem of "radical theory change" in the sciences (p. 102). Beliefs that are held to be the assured results of scientific method in one generation are overturned in the next. "Scientific theorizing is thus provisional" (p. 104). Dawkins’ anti-religion rhetoric is over-reaching, while his "faith" in science is uncritical.
McGrath also takes Dawkins to task for his attempt to apply Darwinian theory to human culture and his argument for the existence of "memes" or "cultural replicators" (see Dawkins’ book The Selfish Gene). He insists that Dawkins’ analogy between the biological gene and the cultural meme is fundamentally flawed. Taking special exception to Dawkins’notion of theism as "a virus of the mind" that has infected humanity, McGrath ponders:
So just what is the experimental evidence that God is bad for you? Dawkins assumes that it is publicly accepted within the scientific community that religion debilitates people, reducing their potential for survival and health. Yet recent empirical research points to a generally positive interaction of religion and health….
Dawkins appears to assume that his readers will rather uncritically share his own subjective views on the malignancy of religion, and thus accept his grandiose conclusions without demur (p. 136).
Contrary to Dawkins’ rhetoric, McGrath suggests that science and religion need not be antithetical. He points to an emerging synthesis, "a new convergence," between science and faith. The "popular notion of a war between science and faith" is largely "Victorian propaganda" (p. 139). Contrary to Dawkins, religion does not present an "aesthetically deficient" view of the world (p. 146). Futhermore, McGrath contends that, "Christian theology does not in any way detract from a natural appreciation of the beauty and wonder of the world; if anything, it adds to it" (p. 151). The Christian concepts of "mystery" and "awe" do not necessarily mean "irrational."
This book is a helpful popular treatment of complicated scientific and theological concepts. McGrath is clear in his critique but never petty nor acerbic. Some evangelicals, however, will not be pleased with the author’s apparent comfort with the theistic evolution position. In the end, McGrath succeeds in exposing the shaky historical, logical, philosophical, rhetorical, and, even, scientific foundations on which Richard Dawkins’ zealous advocacy for atheism vis-a-vis theism (and Christianity, in particular) is based. This work is recommended to the believer to equip him for apologetic engagement with the "new-atheism" represented by Dawkins.
Jeffrey T. Riddle, Pastor, Jefferson Park Baptist Church, Charlottesville, Virginia 22903
Posted by Jeffrey T. Riddle at 5:58 PM