The Baptism of Pocahontas 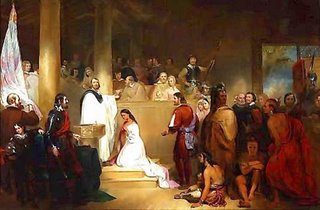 A few years ago my family took a trip down to Jamestown and I noticed a print of the "Baptism of Pocahontas" by John Gadsby Chapman (1808-1889). Chapman's work was commissioned in 1837 and in 1840 it was placed in the United States Capitol Rotunda. It depicts the baptism of the Indian princess by the Anglican minister Alexander Whiteaker in Jamestown sometime around 1613-14. Note the disapproving posture of her brother, Nantequaus. See also the Capitol website article on the picture. Take note of other pieces of politically incorrect Capitol artwork like Robert W. Weir's "The Embarkation of the Pilgrims."
I was struck by the work for several reasons. First, it is a reminder that one of the goals of the colonization of America in the 17th-18th centuries was the evangelization of the new world. See Iain Murray's "The Puritan Hope" and his discussion of the work of John Elliot (1604-1690) among the Algonquin tribe of Massachusetts (pp. 93-95). Second, it speaks to the early 19th century American view of the relationship between church and state. Can you imagine such a scene being commissioned for inclusion in any federal building in 2006? A framed copy of the print now hangs in my office.
Posted by Jeffrey T. Riddle at 11:58 AM

While the painting is mis-titled and the name of the officiant is misspelled by the artist, there should be a disclaimer on the website explaining this.

My posting: http://tourmarm.blogspot.com/search/label/Pocahontas
explains all that.

As a Christian, I prefer primary documents like baptismal records.