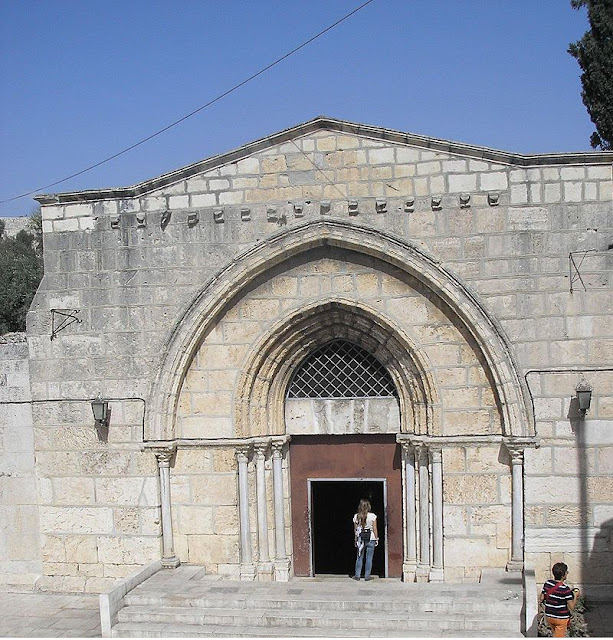 Image: Twelfth century façade of the supposed Tomb of the Virgin Mary in Jerusalem.

“While he yet talked to the people, behold, his mother and his brethren stood without, desiring to speak with him” (Matthew 12:46).

How astonished Christ’s family members must have been at the great throng, the multitude that had been drawn to the Lord Jesus Christ!

Many have been struck by the descriptions of Christ’s family within the Gospels. On one hand, some of them, especially Mary his mother, understood very early on the special person and mission of the Lord Jesus Christ (see Gabriel’s announcement to her in Luke 1:30-33).

One of the sad things to happen later in church history was the rise of an ungodly and inappropriate emphasis upon Mary among some Christians that continues to this day, so that more attention was to Mary than to the Lord Jesus himself. When that happens, it can rightly be described as Mariolatry.

We should not let that later error overshadow, however, the fact that in the Gospels Mary is generally presented as one of the earliest disciples of the Lord Jesus, even if her full understanding of Christ’s identity came not immediately but, as with other disciples, only through a more gradual process.

Matthew says his brethren were also there. Luke tells us plainly that the Lord Jesus was the “firstborn [prōtotokos]” son of Mary (Luke 2:7). Later in Matthew we have mention of his “brethren” (13:53-56). Were these half-siblings or extended kinsmen? The old Puritan exegete Matthew Poole observed, “For the brethren of Christ and his sisters, here mentioned, the most by them understand his near relations.”

Although some of Christ’s family members (like presumably Mary and James) seem to have become his disciples very early in his ministry, others were slower to reach that conclusion. In fact, in John 7:15 the beloved disciple makes this striking statement: “For neither did his brethren believe in him.”

Even here in Matthew 12 it says the family “stood without” (v. 46, 47). In Mark 3:21 we read, “And when his friends [lit. “those with him”; a KJV translation note offers “kinsmen” as an alternative rendering] heard of it, they went out to lay hold on him: for they said, He is beside himself.” Historians talk about the “criterion of embarrassment.” If it sounds unflattering, it must be true. Surely this is a trustworthy tradition. The apostles were not embarrassed to record the fact that early on his ministry some of Christ’s family members did not believe in him and “stood outside” his inner circle.

What this proves, in fact, is the true humanity of Christ. He came as a true man. He did not come with a halo around his head or floating six inches off the ground. What did Isaiah prophesy of him? See Isaiah 53:2b, “he hath no form or comeliness; and when we shall see him, there is no beauty that we should desire him.” If he had been anything other than a true man, he could not have accomplished what he did for us. Paul says, “For verily he took not on him the nature of angels; but he took on him the seed of Abraham” (see Hebrews 2:16-17; cf. Hebrews 4:15).

This tells us who Christ was in his incarnation. That he was a true man is made clear by the fact that even his own family members took some time to come to faith in him. But it also tells us ultimately who he is as the Son of God, because once he was raised from the dead, those same family members, some of whom were slow to come to faith in him, were soundly converted.

Notice Luke’s description of the apostles after Christ’s resurrection and ascension in Acts 1, to which he adds in Acts 1:14, “These all continued with one accord in prayer and supplication, with the women, and Mary the mother of Jesus, and with his brethren.” It was the resurrection that convinced them! It’s been said that the greatest proof of the truth of the resurrection is the fact that those who saw the risen Jesus were forever changed by that experience.

Here is something to consider historically: After the resurrection, there is no record of any family member of the Lord Jesus rejecting his claim to be the Messiah. Believe me, if such persons had existed, they would have been called up by the various Jewish and pagan critics and skeptics. But after the resurrection there are no historical references to the family members of the Lord Jesus NOT believing in him. Just the opposite, there are abundant witnesses to the fact that his family members became faithful disciples of Christ, many even offering up their lives for their faith in him.

Labels: Life of Jesus, Mary of Nazareth, Matthew, The Vision 2022

There are two stories in the gospels about Jesus and his mother that I find interesting.

The first is when the twelve year-old Jesus is found in the temple sitting in the midst of the doctors, both hearing them, and asking them questions. When his mother asks why he has done this, he says "How is it that ye sought me? wist ye not that I must be about my Father's business?" After saying this Jesus is subject to his parents and returns home.

The second story is the wedding at Cana, "And when they wanted wine, the mother of Jesus saith unto him, They have no wine. Jesus saith unto her, Woman, what have I to do with thee? mine hour is not yet come. His mother saith unto the servants, Whatsoever he saith unto you, do it."

What I find interesting is that in both stories Jesus' mother helps to guide him. At 12 years old she knew it was too early for him to begin his ministry, and at 30 years old she knew the time had come. And both times Jesus did what she asked him to do.