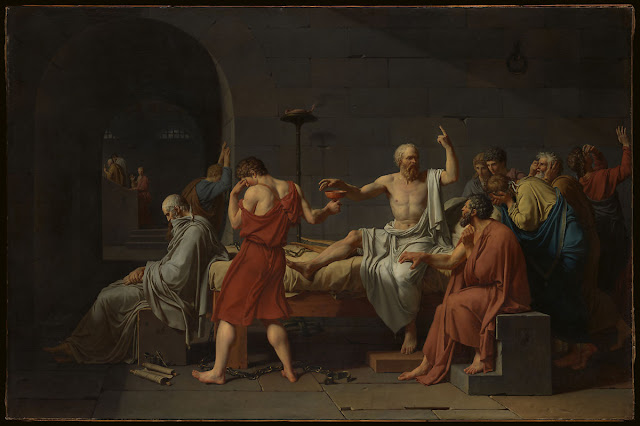 Last week I started re-reading the tetralogy from Plato’s dialogues regarding the last days of Socrates (Apology, Crito, Euthyphro, and Phaedo).

Parallels between Socrates and the apostles:

On dealing with efforts to suppress teaching:

Socrates tells the men of Athens, “I honor and love you; but I shall obey God rather than you, and while I have life and strength I shall never cease from the practice and teaching of philosophy….”

He later says, “For I do nothing but go about persuading you all, old and young alike, not to take thought of your persons or your properties, but first and chiefly to care about the greatest improvement of the soul.”

And adds, “but whichever you do, understand that I shall never alter my ways, not even if I have to die many times.”

Compare this to Luke’s account of the apostles and their persistence in public preaching and teaching the gospel in the face of attempted suppression at the hands of the Jewish religious leaders in Jerusalem:

“But Peter and John answered and said unto them, Whether it be right in the sight of God to hearken unto you more than unto God, judge ye. For we cannot but speak the things which we have seen and heard” (Acts 4:19-20).

“Then Peter and the other apostles answered and said, We ought to obey God rather than men” (Acts 5:29).

Socrates: “But I see clearly that the time had arrived when it was better for me to die and to be released from trouble….”

“The hour of departure has arrived…”

Were the NT accounts influenced by Plato (or Jowett’s translation of Plato by the NT)?