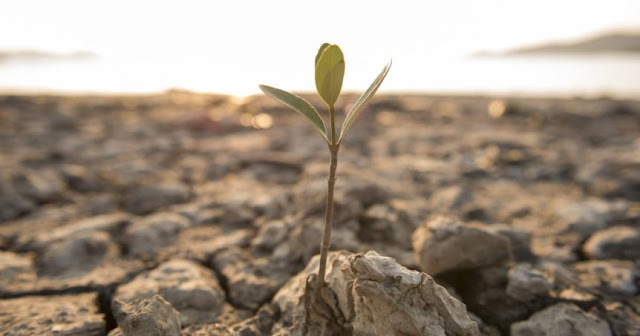 Note: Devotion taken from last Sunday's sermon on Matthew 13:1-23 (audio not yet available).

But he that received the seed into stony places, the same is he that heareth the word, and anon with joy receiveth it; Yet he hath not root in himself, but dureth for a while: for when tribulation or persecution ariseth because of the word, by and by he is offended (Matthew 13:20-21).

It has been suggested that Christ’s parable of the sower in Matthew 13 might well be called the parable of the soils. Christ describes four soils on which the seed lands: the path, the stony ground, the thorns, and the good soil.

Who are the stony ground hearers? These are they who hear the word and “anon [euthus, immediately]” receive it with joy. Initially that sounds encouraging. Some seem to receive the gospel quickly and easily and, even, joyfully. They seem to love God and the things of God. They are very enthusiastic and energetic, or so it seems.

Christ continues, “Yet hath he not root in himself, but dureth for a while [proskairos: for a time]” (v. 21a). He adds, “For when tribulation or persecution ariseth because of the word, by and by he is offended [skandalizo, to stumble].”

Some take this description as a challenge to the doctrine of the perseverance of the saints. Is Christ taking about someone who truly becomes a Christian but then is un-Christianized, or who de-converts, or has his faith de-constructed?

We have to use the whole counsel of God here. We know there are places where the final perseverance of the saints is clearly taught. See John 10:28-29 which proclaims that no man is able to pluck the believer from the Father’s hand.

We need, therefore, to conclude that the stony ground hearers are not genuine believers who fall from grace, but false professors. They have perhaps even deluded themselves into thinking they are born again, when, in fact, they were never soundly converted. For a season, they could walk the walk and talk the talk, and they may even have done so joyfully. But it was not real, and when trial and persecutions came, they dropped it as quickly as they had picked it up.

Remember what Christ told his apostles: “And ye shall be hated of all men for my name's sake: but he that endureth to the end shall be saved” (Matthew 10:22).

This is, in fact, addressed in our 1689 confession of faith. In chapter 10 “Of Effectual Calling” in paragraph 4 it speaks of those who are not elect, who might appear to be outwardly called by the preaching of the word and who might evidence what it calls “some common operations of the Spirit,” and yet who are not effectually called and so do not truly come to Christ and are not saved.

Likewise, in chapter 18 “Of Assurance of Grace and Salvation” in the first paragraph it speaks of “temporary believers and other unregenerate men” who “vainly deceive themselves with false hopes and carnal presumptions” of being saved, but who are not. This would be proven by the fact that they do not abide in Christ.

As I heard someone recently put it, there are only two tests to prove that we are not mere stony ground hearers: time and fruit.