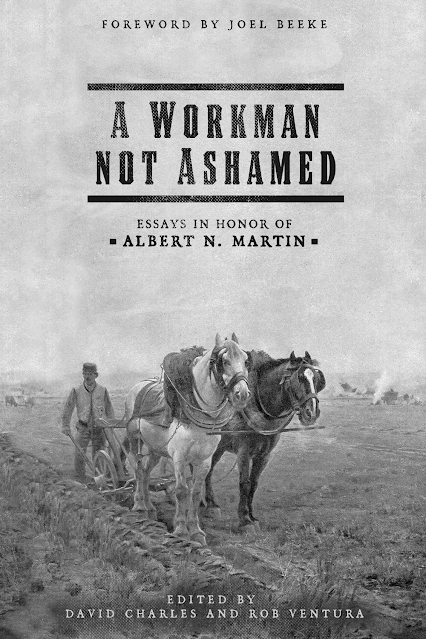 I was pleased to be able to contribute an essay on pastoral theology, "The Administration and Administrators of Baptism", to the forthcoming festschrift for Pastor Albert N. Martin, edited by David Charles and Rob Ventura.
The book titled A Workman Not Ashamed: Essays in Honor of Albert N. Martin is being published by Free Grace Press and can be pre-ordered here.
Here is the forward to the work from Dr. Joel Beeke:
Al Martin’s ministry has had a profound impact on hundreds of faithful ministers and thousands of people for several decades, such that it is high time that a festschrift—that is, a book of essays reflecting his interests and passions written by friends, be written in his honor. I am grateful to David Charles and Rob Ventura who served as the organizers and editors for this festschrift, and wish to testify my gratitude to them and their fellow contributors that this book passes muster for what it is designed to do. I am confident that its honoree will be delighted with its contents.

To profit from this festschrift, one does not have to agree with every detail of each chapter of this book. A wonderful variety of subjects is presented to the reader, reaching the whole man: head, heart, and hands. Good scholarship, edifying soul-enriching food, and experiential and practical applications abound in these pages—all of which reflects Al Martin’s own ministry of the Word.

This book opens with a sketch of Al Martin’s life by John Reuther, who has known him for more than four decades, beginning when he first sat under Al’s preaching at Trinity Baptist Church in New Jersey.

Sam Waldron draws several encouraging points about preaching from Luke’s account of one of the most fruitful sermons in all history: Peter’s sermon on the day of Pentecost (Acts 2). Here we are reminded that preaching is the authoritative proclamation of Christ from the Scriptures with a call to practical action.

Conrad Mbewe presents a plea that pastors mentor future pastors in the context of the local church, just as Trinity Baptist Church for many years sponsored its own academy for pastoral training. Pastors need to study books, but they also need to be with people to learn how godly pastors relate to their families and church members in a variety of settings.

Richard Barcellos provides a detailed exegetical study of the Greek text of Ephesians 4:12 to support the old translation that Paul uses all three phrases to describe the results of the ministry of the word (as in “for the perfecting of the saints, for the work of the ministry, for the edifying of the body of Christ” KJV), not the newer translation that joins the first two to suggest that the ministry of the Word equips others to build up the body.

Alan Dunn writes an essay exploring how the church overcomes the world in its witness through suffering and martyrdom. Dunn strikingly calls this “the strategy of slaughtered lambs.”

Jim Savastio exhorts pastors to “feed the flock of God which is among you” (1 Pet. 5:2), that is, to preach to address the needs of the people whom God has entrusted to them. Toward that end, preachers must know their Bibles and know their flocks.

The core of the message that we preach is the gospel of justification by faith, and D. Scott Meadows opens Galatians 2:15–19 to proclaim that we can never be justified by works of obedience to God’s law. Our righteousness is Christ alone received by faith alone.

Rob Ventura touches upon a key theme in Al Martin’s life: the Holy Spirit and the preacher. Without the prevailing power of the Spirit to convict, convert, and comfort hearers, the preacher would be wise never to enter the pulpit.

At the heart of Christ’s purpose to build His kingdom is the church, with its ordinances of worship. Jeffrey Riddle makes an argument that the ordinance of baptism should be done in the assembly of the church by its designated officers—not just by an informal gathering of believers.

Nothing is more important for the church to do than the worship of God. Scott Aniol explains the Reformed regulative principle of worship and its particular applications by Baptist churches in their practice of baptism, the Lord’s Supper, singing, and church polity.

The goal of preaching the gospel is to restore fallen men and women to fellowship with God—deep and rich communion, as is explored in the chapter by Jeffrey Waddington. He draws particularly from Geerhardus Vos’s insights into the purpose for which God created us.

Few Calvinistic Baptists have attained to the stature of the Bible commentator and systematic theologian John Gill (1697–1771). Gill’s sermon, “The Duty of a Pastor to His People,” originally given at the ordination of George Braithwaite in 1734, rounds out the book with a call to faithful pastoral ministry.

Here, then, you will find a book that honors a veteran minister and teacher of the Word by exhorting other ministers to preach the Word, shepherd the flock, do the work of an evangelist, and fulfill the commission placed upon them by the Lord. May God use the contributions of these authors to raise up preachers who fit the words of Francis Wayland (1796–1865): “From the manner in which our ministers have entered upon the work, it is evident that it must have been the prominent object of their lives to convert men to God.”