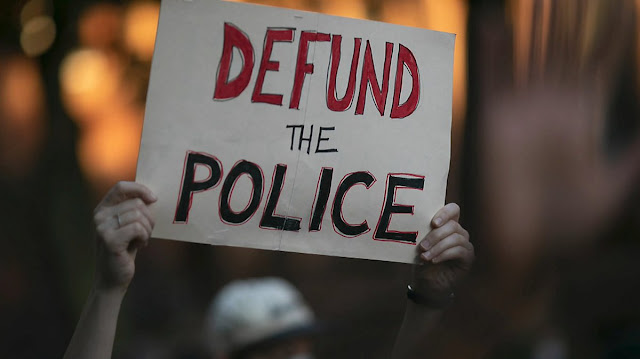 A friend of mine, Mark Tuso, a pastor in Florida, recently shared the devotion below, relating to discerning the times in which we live:

According to God’s design from the Bible, there are three main institutions:

The home;
The Church;
The state.
According to the Bible, God gave each of them a means of restraining/correcting evil/sin: The home - the rod – Proverbs 22:15;
The Church - the keys – Matthew 16:19;
The state - the sword – Romans 13:4.
Satan has been working together through the world to break down the first institution of the home and to remove the rod, effectively removing the restraints of evil and sin designed to be used during the formative years of children born into sin.

We have also seen Satan, working through the world, to oppose the church in general, rejecting the Word of God, and the church of God, undermining what she teaches and her role in society.  In turn, we have seen churches across the country abandon God’s design for the church including the use of the keys (church discipline), effectively filling churches with unregenerate members free to sin without restraint.

Now, we are watching, for the first time in this country, a full attack by Satan on the third institution, and especially on its means of restraining and correcting evil in the cries and the moves to defund and abolish the police department.  Make no mistake, Satan’s aim is to ensure sin rules the day, and to remove any and all obstacles to it, while encouraging men and women and children to reject God and embrace their depravity.

This is spot on and instructive, thanks for posting and to Pastor Mark Tuso.

"...For the Lord God omnipotent reigneth"

Thank you Pastor Riddle and Pastor Tuso (!)--for not following the worldly narrative being shoved down our throats. Godspeed!

15 Foolishness is bound into the heart of a child, but the rod of correction shall drive it far from him.

Meaning or at best implying that when the child doesn't do as he's told, beat him with a rod / switch / belt, and eventually he'll learn to do as he's told because he doesn't want another beating.

Taken by itself, this is abuse at its finest. I've often heard sermons and advice from church elders about discipline, and about how parents should discipline their children. Their advice is taken as the gospel truth, and it shouldn't be. I've watched as one family after another was split up by this advice; the children turned 18 and left, putting as much distance as possible between their parents and themselves. In one case the son called his father out, and threatened physical violence. The same son wrote his grandfather off and never spoke to him again, and worse, never regretted it.

Authority without responsibility is tyranny.

Certainly, teach your children. If for no other reason than people like me have to live with them. But before you try teaching anyone anything, think about this; If your student fails to learn, it's the instructor's fault.

Meanwhile, we've all just experienced thousands of teenagers and young adults running amuck in the streets, rioting, burning and looting across the nation. The majority of which have *no* father and/or received no fatherly (or Biblical) chastisement for misbehaving as children.

Of course child abuse is terribly wrong, but the Bible does not promote abuse--it promotes proper parenting.

"Trust in the LORD with all thine heart; and lean not unto thine own understanding."
Prov.33:5

"6 For whom the Lord loveth he chasteneth, and scourgeth every son whom he receiveth.
7 If ye endure chastening, God dealeth with you as with sons; for what son is he whom the father chasteneth not?
8 But if ye be without chastisement, whereof all are partakers, then are ye bastards, and not sons.
9 Furthermore we have had fathers of our flesh which corrected us, and we gave them reverence: shall we not much rather be in subjection unto the Father of spirits, and live?
10 For they verily for a few days chastened us after their own pleasure; but he for our profit, that we might be partakers of his holiness.
11 Now no chastening for the present seemeth to be joyous, but grievous: nevertheless afterward it yieldeth the peaceable fruit of righteousness unto them which are exercised thereby." Hebrews 12

Note: Either the inbox is full or the email server is under a DOS attack. Anyway, I got an email error message from riddlefam@juno.com.

I rarely imply anything except by accident. I'm a straight shooter, and if that's what I believed, that's what I'd write. Trust me on this one.

Or you could visit my blog at http://madjackshack.blogspot.com/ and judge for yourself. To continue...

Meanwhile, we've all just experienced thousands of teenagers and young adults running amuck in the streets, rioting, burning and looting across the nation.

Take a rioter, arsonist, or looter at random. Take ten while you're at it. How many generations do you think you'd have to go back before you found an actual Christian? My money's on four, but that's just the voice of experience talking - because what do I know?

Look LR, Proverbs 22:15 and related scripture are the most misused segment of the Bible, and here's the how and why. People go to church services, and the reality is that a lot of these people don't have the Lord in their life; meaning they haven't accepted Jesus as their savior. They'll say they've been saved, they answer all the questions correctly, and their general demeanor seems righteous. However - the home life just isn't what it should be, or what it could be, and more often than not the real culprit is tyranny and abuse of authority. The abuse is justified by the use or misuse of Holy Scripture - then the father complains when he isn't honored as Scripture commands he should be.

At the same time you could have an abusive father who stopped going to church services when some idiot of a young pastor delivered a host of insults to the man during the sermon, then had the temerity to ask for a small donation - $50, and that was in 1957. So, according to you and the Bible, no matter what abuse my barbarous father dishes out, I have to obey and honor him - because, you know, Scripture.

Or, alternately, you could be saddled with a violent alcoholic who would beat his wife and children with a belt. That father didn't go to church either, but his children finally grew up and left.

Or, one that I'm watching right now, who is a Christian, and who is also an expert in martial arts and fights in full contact MMA tournaments on a regular basis, and who beats his children for the slightest infraction of his many rules.

If you're up for teaching and missives, you just write an essay on responsibility. I'd like to read it.

MJ, FYI, I'm closing out the old riddlefam address. You can reach me by email at info.crbc@gmail.com.