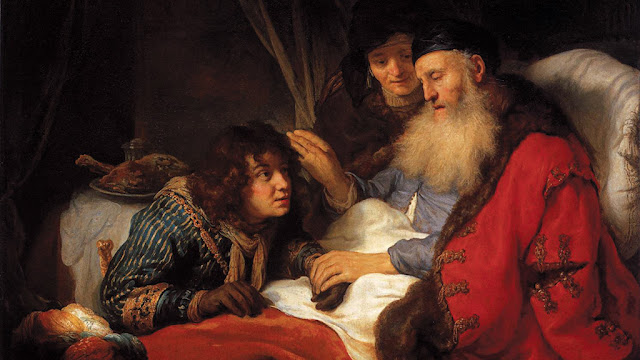 In preparing to give the message at the 2018 Keach Conference, I re-read Calvin’s discussion of the doctrine of justification by faith in book 3 chapter 11 of the Institutes.

Calvin closes with an illustration of justification by Ambrose taken from the Genesis 27 account of Jacob receiving the blessing of his father Isaac while wearing the clothing of his brother Esau:

For this reason, it seems to me that Ambrose beautifully stated an example of this righteousness in the blessing of Jacob: noting that, as he did not of himself deserve the right of the first-born, which gave out an agreeable odor [Gen 27:27], he ingratiated himself with his father, so that to his own benefit he received the blessing while impersonating another. And we in like manner hide under the precious purity of our first-born brother, Christ, so that we may be attested righteous in God’s sight. Here are the words of Ambrose: “That Isaac smelled the odor of the garments perhaps means that we are justified not by works but by faith, since the weakness of the flesh is a hindrance to works, but the brightness of faith, which merits the pardon of sins, overshadows the error of deeds.”

And this is indeed the truth, for in order that we may appear before God’s face unto salvation we must smell sweetly with his odor, and our vices must be covered and buried by his perfection (Institutes, 3.11.23).

In reading this, I was struck not only Calvin’s drawing upon Ambrose (see Anthony N. S. Lane’s John Calvin: Student of the Church Fathers [Baker, 1999]), but by his pre-critical reading of Genesis 27 and the application of it to justification. Isaac is like God the Father; Jacob is like the elect sinner; Esau’s garments are like the imputed righteousness of Christ. This sensus plenior reading of Genesis 27 is not one that modern scholars using the historical-critical method would approve, but it is a “Great Tradition” reading of the historic church (see Craig A. Carter, Interpreting Scripture in the Great Tradition: Recovering the Genius of Premodern Exegesis [Baker Academic, 2018]) that remains spiritually satisfying.