Contrasting Ryan M. Reeves and John D. Currid: Was the study of the Bible in the original languages a hallmark of the Reformation? 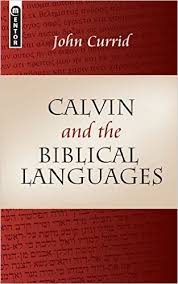 The first misstep in our story, then, is the idea that Greek had been completely lost until the sixteenth century (Ryan M. Reeves).

At the beginning of the sixteenth century the ancient Greek language was, for the most part, unknown (John D. Currid).

Last week I did a post [find it here] critiquing a blog post which recently appeared on the Reformation 21 website by Ryan M. Reeves, assistant professor of historical theology at Gordon-Conwell Seminary, (Jacksonville campus).  I also did a Word Magazine on the same topic (see WM# 46).

Beyond my questions about the accuracy of Reeves’ Erasmus anecdotes, one of the questions I raised about his post was his suggestion that the “real” myth about Erasmus is that there was little study of the Biblical languages in the pre-Reformation period. According to Reeves, there was, in fact, a vibrant interest in the study of the Bible in the original languages that existed even before the Reformation era.  Here is how Reeves put it in his blogpost (with some relevant passages underlined):
So the myth of this story is not that Erasmus altered the course of biblical scholarship. He did influence future scholarship. It is not that the reformers considered Greek irrelevant. The myth is how we understand the context.
Prior to Erasmus a number of scholars learned Greek, mostly for the sake of classical studies, but at times to study the Bible. The Renaissance was centuries old by the time of the 95 Theses, though the movement had begun to focus on classical and biblical languages only in the previous century. Over the years, though, humanists strove to learn the scriptures to the best of their ability, even in the originals. Luther's own right-hand man, Melanchthon, was one of these prodigies in the study of Greek and taught this as a professor at Wittenberg.
The first misstep in our story, then, is the idea that Greek had been completely lost until the sixteenth century. It is not true that everyone prior to the Reformation rejected the original languages for a view of the Vulgate as a pristine text. Catholic commitment to the Vulgate was as much a result of the Reformation as its cause. Prior to the Reformation there was no real dispute over it and other translations were not scorned, except in cases where texts were used by heretical movements. During the medieval period, Bibles did not languish in chains in dusty libraries, unloved and unread. Most people were illiterate, and so only the educated few could read the Bible. The reason they chained it was because it cost as much as a house to produce. One does not chain up things that are unwanted.
Reeves’ comments came to mind again this weekend as I read John D. Currid’s book Calvin and the Biblical Languages (Christian Focus, 2006).  Contrary to Reeve’s comments above, Currid states the following:

At the beginning of the sixteenth century the ancient Greek language was, for the most part, unknown.  It was a mere curiosity even among the educated of Europe, almost a freakish field of study (p. 39).

This stands in complete contrast to Reeves’ statement that the “first misstep” in poplar conceptions of Erasmus is “the idea that Greek had been completely lost until the sixteenth century.” Did Currid make a blunder here, a misstep?  In fact, Currid offers sources to verify his statement.  He cites, in particular, D. Rebitté's work Gillaume Budé restaurateur des études grecques en France (Paris: essai historique,1846), which noted three key eras for the study of Greek in sixteenth century France:  (1) the scarcity period (1500-1530) when very few knew Greek, except for Gillaume Budé; (2) the pioneering period (1530-1560) reaching its climax with the publication of Henri Estienne’s Thesaurus in 1560; and (3) the “full blossom” period (1560-1600).  He notes that Calvin began learning Greek in the second period.

Currid later makes the argument, contra Reeves, that the study of Biblical languages was, in fact, a unique and distinguishing part of the Reformation period, setting it apart from the preceding age, which slavishly followed the Vulgate.  Thus, he writes:

Catholic priests and scholars of the sixteenth century were trained in Latin in order to use the Vulgate.  Few of them, however, studied Greek and even fewer were trained and knowledgeable in Hebrew.  What need was there to learn the languages to get at the real meaning of the Scriptures when, in fact, Jerome’s Vulgate was the Bible of Christianity and the version upon which the Church of Rome based its doctrinal tenets and teachings? (p. 65).

Reeves suggested, however, that RC commitment to the Vulgate was “as much a result of the Reformation as its cause.” Has Currid made another misstep?  Again, he cites a source to verify his view.  In this case his source is G. Lloyd Jones' The Discovery of Hebrew in Tudor England: A Third Language (Manchester University Press, 1983). Currid shares this quote from Jones:

Ignorant and illiterate monks, alarmed by the progress of the new learning, thundered from the pulpit that a new language had been discovered called Greek, of which people should beware, since it was that which produced all the heresies.  A book called the New Testament written in this language was now in everyone’s hands, and was ‘full of thorns and briers.’ There was also another language called Hebrew, which should be avoided at all costs since those who learned it became Jews (cited in Currid, p. 65).

While noting that this view was “commonplace” in pre-Reformation Europe, he evenhandedly observes that “it was dominant, but not absolute,” singling out Johann Reuchlin, in particular (p. 66).  Still, Currid firmly states:

In contrast to the Roman Catholic Church, the Reformers were, for the most part, seriously committed to the study of the original languages of the Bible.  It was a hall-mark of the Reformation (p. 66).

Yet, I would argue that the commitment of the reformers to the study of the original languages of the Bible was one of the hallmarks or emblems of the Reformation (p. 69).

Whereas Reeves appears to downplay the uniqueness of the Reformation interest in the study of the Bible in the original languages in distinction from pre-Reformation Roman Catholicism (and thereby he downplays the divide between the RC and the Reformed view of Scripture), Currid underscores it.

One would think that an article on Erasmus from a historical theologian on a blog titled “Reformation 21” would be a bit more like Currid than Reeves.

As a regular reader who never comments, please accept my gratitude for all the good work here. Thank you! Keep it up!

Thanks for the encouragement.