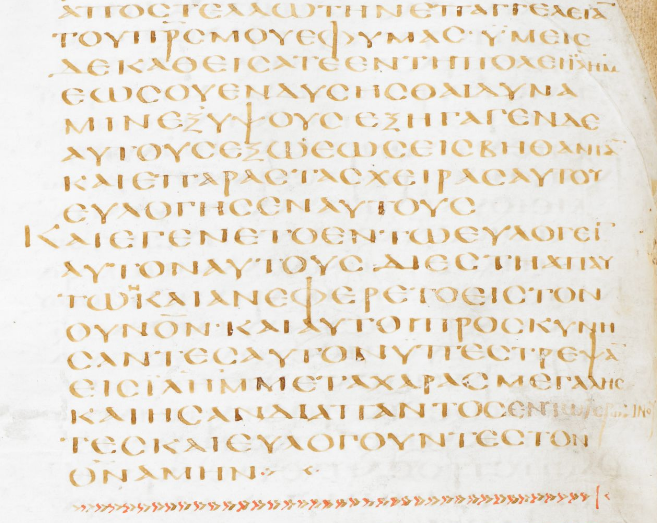 Image:  Close-up of the ending of Luke 24 in Codex Alexandrinus (5th century AD).  Notice c. the middle of the sixth line up from the bottom the beginning of v. 52:  kai autoi proskynesantes auton.... 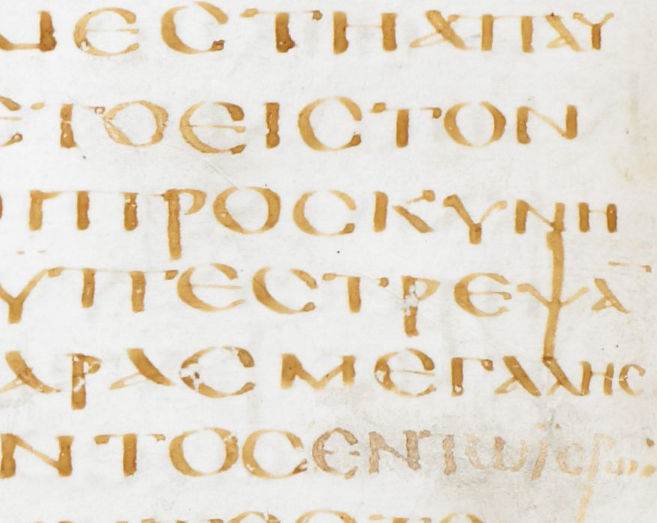 Image:  An even closer look at part of Luke 24:52 in Codex A.  The third line from the top shows the beginning of the word proskynesantes starting with proskyne before it breaks off as the line comes to the column boundary and continues on the next line (out of screen).

I wrote last week about the phrase “and they worshipped him [proskynesantes auton]” in Luke 24:52 and its omission in the original 1971 New American Standard Bible (NASB) [restored in the 1995 updated edition].

KJV Luke 24:52 And they worshipped him, and returned to Jerusalem with great joy:

NIV  Luke 24:52 Then they worshiped him and returned to Jerusalem with great joy.

NKJV  Luke 24:52 And they worshiped Him, and returned to Jerusalem with great joy,

Inclusion of the phrase is supported by the most ancient manuscripts and by the vast majority of manuscripts including p75, Sinaiticus, Alexandrinus, and Vaticanus, etc.

It is omitted, however, in the so-called Western tradition including Codex D, the Old Latin, and the Syriac Sinaiticus manuscript.

Metzger in his Textual Commentary (second ed.) gives inclusion of the phrase a “B” grade.  He notes that a minority of the UBS committee favored its omission.  The majority, however, believed it had been omitted either accidentally by parablepsis or “perhaps deliberately” so as “to accord better with the shorter reading in v. 51” (p. 163).  He does not address the possibility of early omission due to theological reasons (i.e., Jesus is being worshipped by the apostles).

This variant is an example of what Westcott and Hort called a “Western non-interpolation.”  This somewhat tortured phrase was one invented by Westcott and Hort to describe several places, primarily in the last three chapters of Luke, where the normally full Western text omits various phrases which the vast majority, including the ancient Alexandrian uncials so highly prized by modern scholars, include (see Westcott and Hort’s Introduction to the New Testament in the Original Greek, pp. 175-177).  In Westcott and Hort’s Greek NT, the phrase proskynesantes auton is placed in double brackets at Luke 24:52 to express serious doubt as to its authenticity.  The American Standard Version of 1901 included the phrase in its translation but added the note: “Some ancient authorities omit worshipped him….”  The NASB (1971), based on the ASV, made the bold move of omitting the phrase altogether. It returned in the 1995 updated edition, however, perhaps due to the discovery in 1955-56 and publishing of the Bodmer papyri, including p75 which includes the phrase.  Indeed, this would be an example of a papyri find supporting the traditional text.

In my view, there is absolutely no convincing argument in favor of omitting “And they worshipped him” from Luke 24:52.  This is an interesting example of two things:

(1) The way in which the ending of Luke’s Gospel is a particular battleground with regard to establishing the text of Scripture;

(2) The way in which what is in vogue among text critics in one generation (e. g., Westcott and Hort’s “Western non-interpolations”) can be as quickly discarded in the next.  There is, therefore, good reason to abide with the traditional text and not to allow the text to be subject to the shifting winds of each scholarly generation.

Note:  This is not to say that all modern textual scholars have abandoned Westcott and Hort’s take on Luke 24:52.  In The Living Text of the Gospels D. C. Parker acknowledges that the phrase “Western non-interpolation” is an example of “remarkably turgid prose” (p. 149).  However, he still prefers the “shorter text” at Luke 24:52 (p. 172).