The Rise of the "Nones" 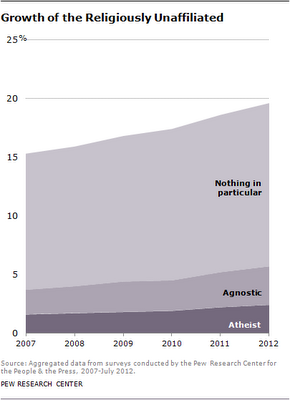 Various media outlets (I've seen and heard it everywhere from the Drudge Report to NPR to the NBC Nightly News) have been reporting the results of a research study on religious life in America released today from the Pew Forum on Religion & Public Life (read it here).

The main gist of the report is that more and more Americans do not claim any religious affiliation (hence "The rise of the 'Nones'").  Here are a few highlights:
As a pastor and church planter I was also intrigued by this graph: 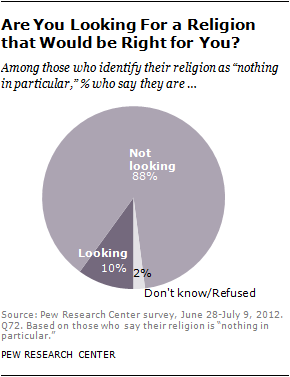 Of those who claim no religious affiliation, 88% say they are not looking to find a religion with which to affiliate.  Hardly a generation of seekers!  No wonder our efforts to reach the lost is often met with a ho-hum response.
These statistics reflect the continuing nose-dive of mainline Protestants and are likely also an indictment of the failures of evangelical-Protestant efforts in recent decades to woo young adults via contemporary worship, seeker sensitive services, and youth oriented programming.  Young people who remain faithful to the Lord will be an evermore curious and pecular witness among their peers.
Of course, these statistics also encourage us to continue to be faithful in holding forth the simple and unadorned gospel.  When Christ builds his church the gates of hell cannot prevail against it.
JTR
Posted by Jeffrey T. Riddle at 9:13 PM