Orientation to the 2012 Keach Conference 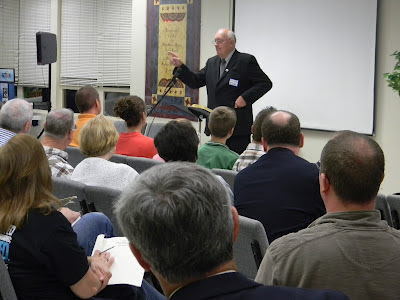 Image:  Lloyd Sprinkle speaks at the 2012 Keach Conference
Note:  Below are my notes from the "orientation" to this year's Keach Conference, given last Friday:
Greetings in the name of our Lord Jesus Christ!  It has become my glad duty each year to offer a bit of an introduction or orientation to the Keach Conference.


This is the eleventh consecutive year that ministers, other officers, and members from churches in the Commonwealth of Virginia have gathered for this theology and ministry conference.


A glance at the history of our past meetings tells you something of the metamorphosis of the gathering.  It began with a group of Calvinistic Southern Baptists then serving in the moderate-liberal BGAV who met for an alternative pastors’ fraternal.  Our purpose was to offer mutual encouragement and, very often, this included solace, counsel, and hope as many brothers served in difficult situations.  It is no accident that the speaker that first year was the leader of an organization that ministers to hurting pastors.


Over the years our focus became more theological, however, than explicitly pastoral.  Again, the historical record of our meetings is instructive.  Initially our focus was on soteriological Calvinism and more broadly evangelical concerns.  Our speakers came primarily from the Southern Baptist Theological Seminary and SBC circles.  The broad focus of our fellowship was reflected in our initial name, “The Evangelical Forum.”


A watershed year was 2007 when we committed to a year-by-year consecutive journey through the articles of the Second London Baptist Confession of Faith (1689).  Note:  This year we are on chapter 6 of 32.  At this rate, should the Lord tarry, I believe we will complete our plan in 2038 [I will be 73 years of age]!  Of course, these are our plans and they may or may not be the Lord’s.


Another watershed was 2010 when we formally changed our name to “The Keach Conference” in honored memory of Benjamin Keach, the early Particular Baptist leader who was there in 1689 when our confession was adopted (and, by the way, the only Baptist Puritan included in Joel Beeke and Randall Pederson’s Meet the Puritans).


Over the years we have been blessed with some gifted speakers who have encouraged and enriched us. It has been our custom in recent years to try to invite at least one speaker who ministers primarily in the academic arena (though a committed  churchman) and at least one who ministers primarily in the arena of the local church.  This year we are blessed to have Dr. Trueman from Westminster Seminary and two local church pastors from Virginia, Pastors Sprinkle and Wheeler.


Our theme this year is chapter six:  “Of the Fall of Man, of Sin, and of the Punishment Thereof.”  We have come to hear good preaching and teaching and to experience good fellowship.  I recently read The Sermons of the Great Ejection of 1662. In his sermon in this collection, Thomas Watson admonished his hearers by saying, “Christ’s doves should flock together….  Conference sometimes may do as much good as preaching.”  By “conference” of course, he did not mean this kind of meeting but Christian fellowship in general.  In this meeting may we both hear good preaching and teaching and enjoy “conference” as Christ’s doves.
JTR
Posted by Jeffrey T. Riddle at 7:02 PM