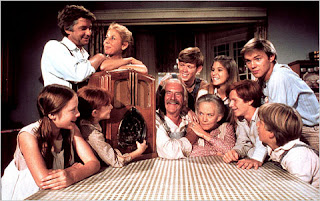 Judi L. loaned our family her DVD collection from the television program “The Waltons” at the start of the summer. Our summer days were spent with work, gardening, and baseball, but we spent many a summer evening this year watching episodes of the Waltons. Series creator Earl Hamner is from nearby Schuyler, Virginia, the inspiration for mythical “Walton’s Mountain” in “Jefferson County” Virginia. For those who aren’t familiar with the series, it ran on commercial television from 1972-1981 and follows a multi-generational family (grandparents, parents, and seven children) in a close-knit rural Virginia community during the Depression years. The show’s premise is semi-autobiographical, drawn from Hamner’s life. The main character is “John-boy,” the eldest son and an aspiring writer. Many of the episodes are particularly poignant given the unemployment and recession of these days. The children also enjoyed the local references to Charlottesville, UVA, Scottsville, Waynesboro, Rockfish, etc. In one episode, the grandfather even mentions going to a turkey shoot in North Garden! My favorite episode: “The Genius.” The stories are generally well written, and the values are traditional (though some of the episodes on faith are wobbly). This was from the age before “shows about nothing.”
A few Saturdays ago we took a family trip over to Schuyler (just c. 20 minute drive from our house) where you can visit the restored Hamner home, the Walton’s Mountain Museum, and Ike Godsey’s store. 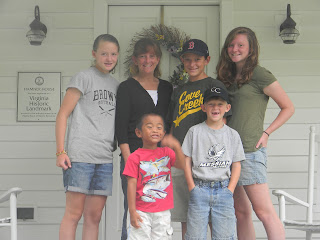 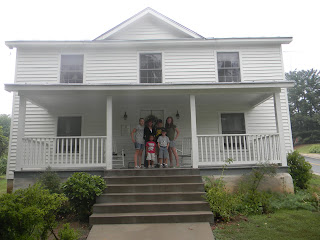 Images:  Outside the Hamner house in Schuyler, Virginia.
We’ve now exhausted the DVDs, summer is over, and the children have started the new school year. Time to say, “Good night John-boy.”
JTR
Posted by Jeffrey T. Riddle at 9:49 AM

We love the Waltons here! We haven't seen it for a while - we tend to watch DVDs in the winter nights, so we'll prob dig out the DVDs over the next few months. We're often heard last thing at night to be shouting, 'Good night, Dad', 'Goodnight, Mom',,, and then ending with a 'Goodnight John-boy'!

I didn't realise there was a restored house. Maybe if (ahem, *when*) we come to VA, we'll visit it ;)