Sermon of the Week: Sinclair Ferguson on the Marrow Controversy 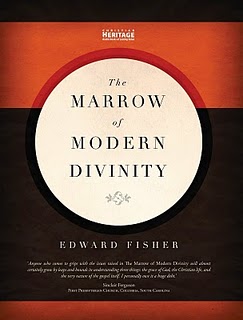 I saw this series of lectures by Sinclair Ferguson on the "Marrow Controversy" suggested in an RB discussion on Edward Fisher's The Marrow of Modern Divinity:
Got a chance to listen to them this week.  Wow!  These presentations are powerfully stimulating and challenging.  Highly recommended.  Ferguson first lays out the issues in the early 18th century "Marrow Controversy" in Scotland over free grace.  He then give one lecture each on the errors of legalism and antinomianism.  He makes the point that these are not opposites of each other, but both are the opposite of free grace.
A few notes:
On legalism:
On "experimental legalism" Ferguson notes, "We all know it is possible to have a legal head and legal heart, but it is also possible to have an evangelical head and a legal heart."
He gives this definition of legalism:  "Legalism is any teaching which either distorts the free grace of God in the gospel or distorts the true nature of God's grace in the law, or even fails to place the gracious law of God in its proper place in redemptive history."
On antinomianism:
One the low view of the moral law in the ten commandments (particularly the fourth commandment):  "Many have replaced the Decalogue with the 'Novemalogue.'"
Antinomians love this doggerel:  "Free from the law, what a blessed condition, I can sin all I want and still have remission!"
Ferguson make a compelling appeal appeal to the Parable of the Prodigal Son, presenting the prodigal as an antinomian who became a legalist (I will return to my Father and be a slave to him) and the elder brother as a legalist tempted to antinomianism (Why did I not get the benefits of the Prodigal?).
JTR
Posted by Jeffrey T. Riddle at 9:22 AM

Labels: Sermon of the Week