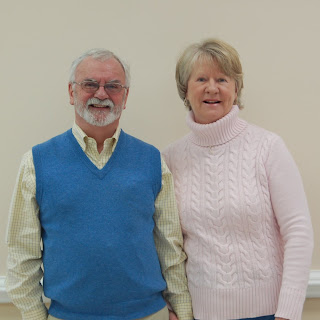 Yesterday (Sunday, July 19, 2009) I led in one of the most difficult funeral services I think I have ever had to do as a Pastor. My dear friend Howard Anderson died unexpectedly in a boating accident near Gloucester, Virginia last Wednesday, July 15th. Howard was a regular reader and contributor to this blog. It was not at all uncommon for him to call me on the phone when a post went up to discuss whatever issue or comment was being addressed. I always looked forward in particular to seeing him at our Wednesday evening meeting at JPBC and touching base on how the week was going. The last two years, Howard went with me to the Banner of Truth ministers conference, where I was richly edified not only by the conference but perhaps more particularly by our fellowship and conversation.
Howard was an accomplished man. He graduated from UVA and had a distinguished career as an accountant. As I noted yesterday, Howard also had diverse and multi-faceted interests in aviation (he was a skilled pilot who had accomplished a life-long dream in 1994 when he built his home in Scottsville so that he could walk out of his house to his hangar, plane, and runway [which doubled as his driveway]), music (he loved bluegrass and gospel music and could play the guitar, banjo, and mandolin, among other instruments), writing, and theology (he loved the doctrines of grace!).
He and his wife Joan had a peculiarly satisfying marriage union in which Howard’s love for Joan so clearly reflected Christ’s love for the church. Our hearts have been broken for Joan as we have grieved alongside her this past week.
According to God’s Providence, the Lord’s Day before Howard’s death (July 12th) our church had gathered at the Anderson’s home for our July Church Family Fellowship. In the meeting Howard had picked up his guitar and led us in singing the hymn, "Because He Lives." As we reminded each other yesterday, we grieve not as men who have no hope (1 Thess 4:13). Howard could say with Paul, "For me to live is Christ, to die is gain" (Phil 1:21). We find immense comfort in that.
JTR
Posted by Jeffrey T. Riddle at 5:05 PM

Howard was one of the finest men I've known and a true role model for me. He embodied the description of elder described in 1 Timothy 3, which to me is the best compliment I can give a fellow man of God. I will miss him terribly as will our congregation.